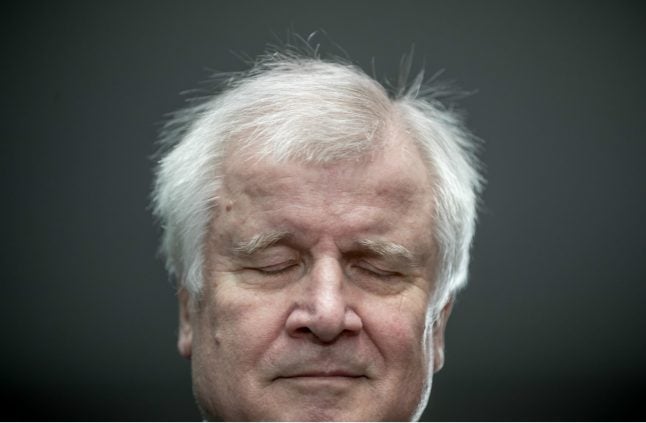 What is the problem?

Germany's conservative parties are a little like two crime families who work together as long as one stays off the other's turf. This has worked out pretty well over several decades as the CSU have sat in power in Munich, while the CDU dominated politics on the federal level.

There were unwritten rules to their collaboration though. Whereas the mafia (at least in the films) drew a line at bringing drugs into the country, the unspoken code of German conservative politics was: no immigrants (or at least, not too many).

When Angela Merkel decided not to close the borders as thousands of refugees crossed the border in 2015 she broke this rule. Ever since then the ageing boss of the CSU, Horst Seehofer, has been seething. Throw into the mix a hot-headed upstart who is challenging Seehofer's grip on power in the CSU and you not only have the ingredients for a ropy Hollywood movie, but also for real-life German politics.

Now Interior Minister, Seehofer has loudly declared that Germany has been too soft in applying EU law on asylum seekers. He was set to publish an “asylum masterplan” a little over two weeks ago, which would have given him the power to stop migrants coming into the country.

But Merkel bluntly rejected the proposal.

Ever since then conservative politics in Germany has been in a state of meltdown. Seehofer claims he can't understand why Merkel rejects what he describes as a technicality, while Seehofer has been accused of putting Bavaria's interests above those of Germany and Europe.

And with state elections coming up in Bavaria in the autumn, there is every reason to believe that Seehofer and the young upstart Marcus Söder aren't thinking about much else other than what goes on inside their own territory.

The upshot of the controversy was that Seehofer gave Merkel two weeks to find a deal on migrants with other EU countries, otherwise he would shut the border whether she liked it or not.

If he goes ahead, decades of peace between the conservative clans will come to an end. Seehofer will force Merkel to fire him and their Bundestag alliance will be over. A pitched battle for power will commence in the build up to Bavaria's autumn elections. Things could get very messy.

Seehofer's deadline is up this Monday. On Sunday, the most important members of the CSU will come together in Munich to discuss what steps they'll take next.

In the meantime, Merkel has been wringing every last inch of guile out of her political neckerchief in an attempt to get European deals signed that stave off the threat of a rebellion from down south.

The first success was announced early on Friday morning when she managed to secure a surprise agreement between the 28 EU member states on migration.

But the agreement was thin on the ground on details on the crunch issue for Seehofer, so-called “secondary migration”, a phrase which refers to migrants moving around within the EU. The agreement only contains the vague statement that “member states should call on all necessary internal lawful and administrative processes in order to prevent such movements, and should collaborate closely on this issue.”

Then later in the day Merkel could announce bilateral deals with Spain and Greece, committing them to taking migrants who German border police detain at the border. The big one, Italy, remained elusive, though. Most asylum seekers who reach Europe come through Italy – and Merkel has been unable to get Rome to commit to a bilateral deal.

So will Seehofer pull the trigger?

One fundamental reason why the CSU have been so agitated is that another organization has been aggressively muscling in on their patch. The Alternative for Germany (AfD) have managed to be more populist, more anti-immigrant and more reactionary than the Bavarians – and in doing so have stolen a whole heap of business from Seehofer and his gang.

Polling shows that the AfD are on course to win 14 percent of the vote in Bayern, a result which will drag the all-mighty CSU down to their worst score since the 1950s. The days of absolute power will be over.

So the temptation is clearly there: pull the trigger and show the Bavarian beer halls that you don't take orders from Berlin.

If only it were that simple, though. Were Seehofer to close the border to migrants, thus pulling down the government and ending the alliance with the CDU, Merkel's party would swiftly move onto his patch.

And polling shows that many Bavarians are secretly crying out for freedom from the yoke of one-party rule.

A poll released on Friday by Forsa showed that 54 percent of Bavarians who voted CSU at the last election would swap to the CDU if they had the choice. That poll suggested that the CDU would win 33 percent of the vote in a Bavarian state election.

Meanwhile well over a third of Bavarians told Forsa that the CSU are the single biggest problem in their state, above the number who said refugees are Bavaria's biggest headache.

Meanwhile a powerful alliance of business leaders has closed rank behind the Chancellor.

The country's four most influential industry associations on Friday released a common statement which denounced Seehofer in no uncertain terms.

“What we need now is a stable and resolute government that works together with its European partners constructively and calmly,” the statement read. “The German economy is convinced that acting only out of national interest will do more harm than good.”

So will Seehofer close the border and risk an all out battle for power in Bavaria? Only he knows that – and on Friday he was staying silent. A spokesperson said that he was refusing to comment on the EU migration summit. He would wait instead to speak to Merkel in person.