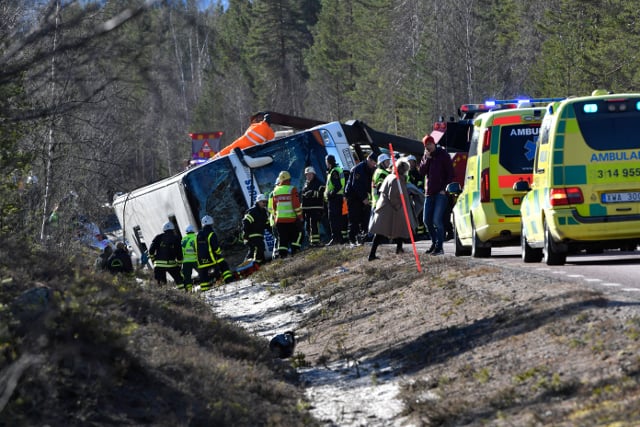 Fifty-eight passengers, teenage pupils and teachers, were on board the bus when it suddenly went off the road and crashed into a ditch on the morning of April 2nd, 2017, in the Härjedalen region.

After investigating the incident for over a year, the prosecutor on Wednesday charged the bus driver with carelessness in traffic as well as causing the death and injury of other people.

“We have found that the accident was not due to the bus nor to the road. It was negligence on the part of the driver,” prosecutor Mikael Bäckström told Swedish news agency TT.

“I would like to emphasize that we have not been able to prove that he fell asleep at the wheel. But he was tired and that reduced his alertness and concentration, causing him to drive off the road.”

The bus driver risks jail, but denies the charges.

“He was not tired and did not fall asleep. He took breaks during the journey, one break shortly before the accident,” the man's lawyer Ulrik Smedberg told TT, saying his client believed the notoriously uneven road surface on the E45 road in the area had caused the vehicle to lose its grip on the road.

The prosecutor said the driver was not suspected of having broken any rules regulating driving time and rest: “When it comes to working time, the bus company had a tight schedule but in line with regulations. So the company met its responsibility and that's why is is not being charged,” said Bäckström.

He also chose not to press charges over the face that several pupils aged under 15 had failed to use their seat belts. “Teachers urged the youngsters to use belts. But they were not able to check that everyone heeded that call. But the call itself is enough to free them of responsibility.”

The case will go to court later this year.