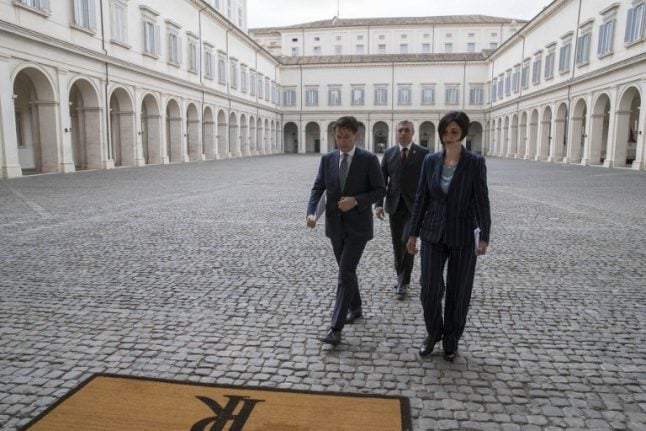 Conte's appointment could herald an end to more than two months of political uncertainty in the eurozone's third-biggest economy, but the coalition's eurosceptic and anti-immigrant stance has alarmed senior European officials.

President Sergio Mattarella on Wednesday approved Conte's nomination to be prime minister of a government formed by the anti-establishment Five Star Movement and the far-right League. Little-known lawyer Conte survived a battering in the press over claims he exaggerated his CV.

On Thursday he held meetings with delegations from political parties in order to put together the country's new government.

According to the media, he could present his cabinet to the president on Friday. The list of ministerial candidates must be endorsed by Mattarella before it can seek parliamentary approval.

READ MORE: Who is Giuseppe Conte, the political novice picked to be Italy's populist PM? The press conference was the first time many had heard Conte's voice. Photo: Vincenzo Pinto/AFP

Conte, 53, struck a conciliatory tone towards Europe when speaking to journalists at the presidential palace.

“I'm aware of the necessity to confirm Italy's place, both in Europe and internationally,” said the prime ministerial nominee, who cast himself as the “people's lawyer”.

“My intent is to give life to a government of the people that looks after their interests. I'm ready to defend the interests of Italians in Europe and internationally, maintaining dialogue with European institutions and representatives of other countries.”

EU Economic Affairs Commissioner Pierre Moscovici said Thursday it was a “fairly good sign” that Conte had called for dialogue.

“I continue to believe Italy will remain a core country of the eurozone,” he added.

Mattarella had reportedly been concerned about plans by the two coalition parties to name staunch eurosceptic Paolo Savona as economy minister.

A joint government programme unveiled by the parties on Friday pledges anti-austerity measures such as drastic tax cuts, a monthly basic income and pension reform rollbacks. Di Maio and Salvini claim the measures will boost growth.

But EU officials have voiced concern that Italy could trigger a new eurozone crisis by refusing to stick to public spending and debt targets set by Brussels.

On Thursday the European Central Bank (ECB) – which holds around 17 percent of Italy's €2.3 trillion debt – warned the country against reckless spending. “A loosening of the fiscal stance in high-debt countries could impact the fiscal outlook and, by extension, market sentiment” towards governments when they try to sell bonds, the ECB said in its biannual financial stability report.

The government programme also includes plans to speed up expulsions of illegal immigrants and crack down on trafficking. Nearly 700,000 people have landed in Italy since the migrant crisis exploded in 2013.

Bullish League leader Salvini has responded forcefully to criticsm of the programme. On Thursday he appeared to take aim at Brussels.

“Finally, we're getting off the ground. I hope there are no more attempts, from Italy or abroad to stop the change: Work first, security first,” he tweeted. “#ITALIANSFIRST. We will never again be anyone's slaves.”

In Hungary, daily newspaper Magyar Idok – which is close to eurosceptic Prime Minster Viktor Orban – said in an editorial that it approved of the new government, adding it “could not do any harm in the battle against Brussels and in the run-up to the 2019 European elections”.

At the March 4th election, Five Star became the country's largest singleparty in parliament with nearly 33 percent of the vote. The nationalist League won 17 percent within a right-wing coalition that topped the polls.

Unhappy with the Five-Star League programme, the League's former allies – including Forza Italia, the party of political heavyweight Silvio Berlusconi – have placed themselves in opposition to the nascent government.

Forza Italia has denounced the government programme as “worrying”.

The centre-left Democratic Party (PD) said on Wednesday that it marked “the birth of a far-right government, with a far-right programme”. Centre-left former premier Matteo Renzi said his PD party would be the “civil opposition” to Conte.