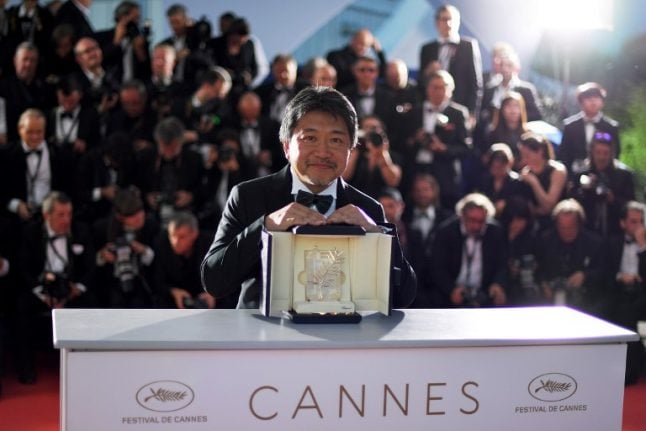 Japanese director Hirokazu Kore-Eda poses with his trophy on Saturday after he won the Palme d'Or for the film "Shoplifters (Manbiki Kazoku)" at Cannes. Photo: Loic VENANCE / AFP
Spike Lee accepted the runner-up Grand Prix for “BlacKkKlansman”, a searing broadside against racism with the stranger-than-fiction true story of an African-American police officer who manages to infiltrate the highest levels of the Ku Klux Klan. Jury president Cate Blanchett said the film, which explicitly links the 1970s tale and white nationalism in the Trump era, “blew us out of the cinema”.
But the most stunning moment of the night came when Italian star Asia Argento, who has said she was raped by Weinstein at Cannes in 1997, took the microphone and vowed to fight for justice for other victims.
“This festival was his hunting ground,” said Argento, who says she was 21 when Weinstein attacked her in his hotel room.
“Even tonight sitting among you there are those who still have to be held accountable for their conduct against women. We know who you are and we are not going to allow you to get away with it any longer,” she said to cheers from the audience.
Minutes before the actress took the stage police in Paris said they had opened a criminal probe against one of France's best-known directors, “The Fifth Element” maker Luc Besson, for allegedly raping an actress.
READ MORE: French director Luc Besson accused of rape, denies 'fantasist' accusations
'Rare good news'
Lebanese actress-director Nadine Labaki, one of three female filmmakers among the 21 contenders, earned the third place Jury Prize for “Capernaum” set among the poorest of the poor in Beirut and featuring a devastating performance by a 13-year-old Syrian refugee boy.
Kazakhstan's Samal Yeslyamova nabbed best actress for “Ayka” by director Sergey Dvortsevoy for her moving portrayal of a young jobless immigrant from post-Soviet Central Asia who abandons her baby in Moscow.
Polish Oscar winner Pawel Pawlikowski took the prize for best director for “Cold War”, a tragic love story set against the backdrop of the Iron Curtain. Pawlikowski, who won the foreign-language movie Oscar for “Ida” in 2015, caused a scandal at home when he told AFP at the festival that the film had been “blacklisted” by the nationalist government. Warsaw denied the claim. He said his award was “a rare piece of good news” for his country.
Italy's Marcello Fonte — who was working as a caretaker when he was discovered — was the night's fairytale winner. He clinched best actor for his much-loved performance as a soft-spoken pet groomer who stands up to a heavy in Matteo Garrone's “Dogman”.
“Three Faces” by Iran's Jafar Pahahi, who was barred by Tehran from attending the festival, shared the best screenplay prize with Italian director Alice Rohrwacher's “Happy as Lazzaro”.
The Belgian transgender ballerina drama “Girl” won the Camera d'Or prize for best first film. It had earlier scooped the Queer Palm prize for LGBT-themed cinema and the best actor award for Victor Polster in the Un Certain Regard sidebar section.
French-Swiss legend Jean-Luc Godard also got a special prize for “The Image Book”, a bold, sometimes baffling meditation on the big questions of our time — war, migration and the survival of the planet.
'Very scary time'
“Shoplifters” was an early favourite at the 71st Cannes festival. It depicts a couple who rescue two abused and neglected children, providing the first love the youngsters have experienced even as they groom the kids to steal.
US movie website IndieWire hailed it as “miraculous” while The Guardian called it “a rich, satisfying film”.
Spike Lee called his own movie, which many critics hailed as a return to form for the “Do the Right Thing” director, a “wake-up call” against extremism around the world.
“It's a very, very scary time we live in,” he told reporters. “There is a lot of change but there is a lot of stuff that needs to  happen… and with the present (Trump) administration they're doing many things to roll back the clock which I feel is dangerous.”
Beyond the prize winners, this year's festival will linger for its off-screen moments. Hollywood stars including Blanchett, Kristen Stewart, Helen Mirren and Salma Hayek and directors Ava DuVernay and Patty Jenkins joined a red-carpet protest to demand equal opportunities for women and a “safe workplace”. Two days later, festival organisers signed a pledge to encourage more diversity in its selection by 2020.
Despite being one of the most sought-after tickets, the premiere of Danish bad boy Lars von Trier's “The House That Jack Built” saw audience members walk out in droves from what they called a misogynistic orgy of violence.
Both its female stars, Uma Thurman and Riley Keough, were conspicuously absent from the red carpet, where Stewart on another night staged a protest of her own by slipping off her high heels and climbing the vaunted Cannes stairs barefoot.
In 2017, the top prize went to Ruben Ostlund's “The Square,” an art world send-up that went on to bag an Oscar nomination.
By AFP's Deborah Cole