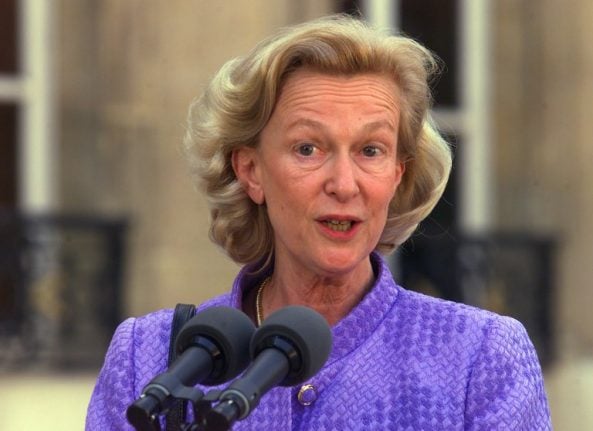 Nicole Fontaine giving a speech in Paris in March 2000. Photo: Georges Gobet/AFP
Fontaine, a centre-right former lawyer who led the EU assembly from 1999 to 2002, was the second woman to hold the post after former French minister, Holocaust survivor and rights icon Simone Veil.
She died on Thursday, former minister Dominique Bussereau said.
“For 35 years of her life, she fought for the European project,” Macron said in a statement.
Born in Fecamp on the northern French coast, Fontaine was an MEP from 1984 until the end of her time as parliament chief and also served as France's industrial minister between 2002 and 2004.
A 1999 profile by The Economist described her as “a consensus-seeker, coalition-builder, conciliator… nowhere more at home than in the byzantine corridors of Europe, canvassing cross-party support, flashing her smile, teasing out compromise”.
After Britain's shock referendum vote in 2016 in favour of leaving the EU, Fontaine declared that she was unsurprised by the result, describing Europe as “sick with a democratic deficit”.