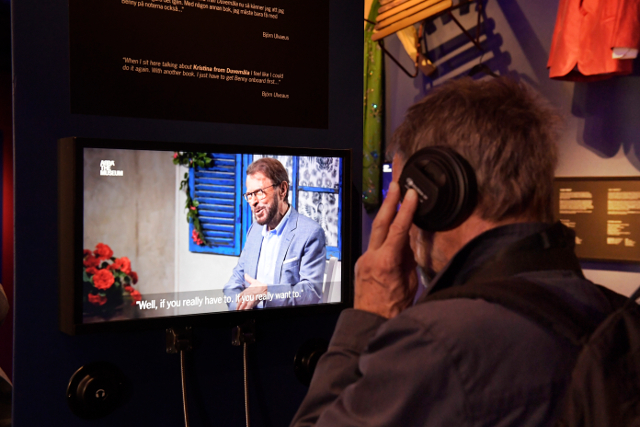 Keep scrolling for more pictures and a video of the new exhibition. Photo: Janerik Henriksson/TT

“Since we started (the Abba Museum) in 2013 the most frequently asked question has been 'what happened afterwards?' after 1982 when Abba split,” says Björn Ulveaus as he opens the exhibition.

“But people here at the museum kept pestering me and said 'you should tell the whole story'. I held back but now I have succumbed,” he tells the many journalists, both Swedish and international, present.

Given the theme of the exhibition and the recent news that the legendary Swedish pop quartet have recorded new songs together, people in the room are starting to get their hopes up. When Ulvaeus announces he has invited some friends to help him cut the rope, someone cries “Benny!”.

Watch Ulvaeus talk about the story behind the new exhibition in this video:

But the Abba reunion is never mentioned during the event. Instead musical artist Peter Jöback appears on the small stage. He played a leading role in 'Kristina from Duvemåla', the 1995 musical by Ulvaeus and Benny Andersson about Swedish farmers emigrating to North America back in the 19th century.

READ ALSO: What you need to know about the Abba reunion

Before entering you pass through a room where Swedish director Jonas Åkerlund has made a short film that begins with the clips of the final days of Abba. It is followed by highlights of the years since, a tribute to Ulvaeus, Andersson, Anni-Frid Lyngstad and Agnetha Fältskog and their careers post-Abba.

A replica of a gate at Stockholm's Arlanda Airport is the entrance to the exhibition itself. It was through a similar gate that they made their last trip as a group. A sign reads: “Here dear visitor is where the post-Abba journey starts. The flight you're boarding will take you to London and then out into the world. You'll arrive at veritable funfair. Because that's what it turned out to be.”

After that, the exhibition opens up. A mix of stage clothes, interactive stations and the stories behind lyrics of songs written after the breakup, all neatly packaged with their own themed area.

FOR MEMBERS: How to understand Swedish politics through Abba songs Some of the four members' projects in the post-Abba years. Photo: Micke Bayart/Azul

Behind one curtain is an area dedicated to the 1986 musical Chess by Ulvaeus and Andersson. As part of one of the interactive experiences, visitors get to conduct the song 'One Night in Bangkok' on a big screen.

A classic Swedish dance pavilion is located in one of the corners, where visitors are encouraged to dance and enjoy themselves. On top of the wooden structure it says 'Benny Andersson's Orchestra (BAO)'. The Swedish folk music band formed in 2001 is one of Andersson's biggest projects since Abba. The exhibition continues on with original pieces from 'Kristina from Duvemåla'.

There is also clothing worn by Lyngstad and Fältskog and miscellaneous information about the members (did you for example know that Ulvaeus earned a honorary fire chief title in 1997?).

Abba-themed musical Mamma Mia gets an interactive piece where you can paint the door on Donna's house from the movie. Chronologically we are now close to 2018. The last piece is a miniature model used to create the scene for Stockholm-based restaurant and event venue 'Mamma Mia The Party'.

Before you leave the last sign leaves you with something of a promise: “The break up was indefinite, but as always the future is just around the corner, so keep your eyes and ears open for 2019… More to come…”

MEMBERS' QUIZ: How much do you really know about Abba? The exhibition pays tribute to the careers of Agnetha Fältskog and the other three members. Photo: Janerik Henriksson/TT

ABBA's new album, 'Voyage' for sale in Stockholm at the start of this month. Photo: Jonatan Nackstrand/AFP

“Voyage” by the Swedish quartet of Agnetha, Bjorn, Benny and Anni-Frid racked up 204,000 chart sales in the seven days since it was launched last Friday.

Sales gave the supergroup the biggest opening week on the UK album chart in four years since Ed Sheeran’s “Divide”, and fastest-selling album by a group in eight years.

The last fastest-seller was One Direction’s “Midnight Memories” in November 2013.

READ ALSO: Abba’s new album has arrived – tell us, what do you think?

ABBA, propelled to global fame by their 1974 Eurovision Song Contest win with “Waterloo”, split in 1982, a year after their last album, “The Visitors”.

“Voyage” is their 10th number one album in the UK: only seven other acts — The Beatles, Elvis Presley, the Rolling Stones, Robbie Williams, Madonna, Bruce Springsteen and David Bowie — have had more.

The group said in a statement: “We are so happy that our fans seem to have enjoyed our new album as much as we enjoyed making it.

“We are absolutely over the moon to have an album at the top of the charts again.”

The 204,000 sales comprise 90 percent physical copies, including 29,900 on vinyl, making it the fastest-selling vinyl release of the 21st century.

The previous record holder was the Arctic Monkeys’ “Tranquility Base Hotel & Casino”, which sold 24,500 vinyl copies in 2018.