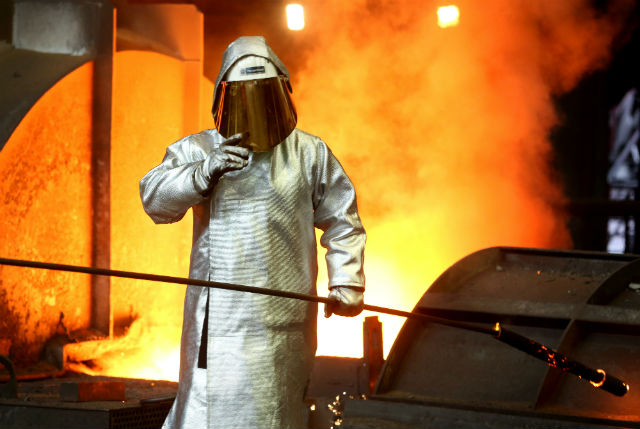 steel worker inspects the steel quality at the blast furnace 8 at ThyssenKrupp's plant in Duisburg. Photo: Roland Weihrauch/dpa
“The German government has taken note” of the decision by US President Donald Trump to hold off on imposing controversial tariffs on steel and aluminium from the EU, Canada and Mexico, a government spokeswoman said.
But Germany “is still waiting for a permanent exemption” from the tariffs and wants the European Commission to “continue dialogue with the United States”.
Germany's call came as the European Union accused the United States of prolonging  “market uncertainty” with its decision to hold off on imposing the controversial tariffs.
The 25 percent tariffs on steel and 10 percent duties on aluminium — a key tenet of US President Donald Trump's “America first” approach to worldwide trade — were due to go into effect on Tuesday.
But after renewed fears of a trade war spooked Wall Street, Trump said he was holding off the levies, offering a 30-day reprieve to Canada, Mexico and the EU.
The European Commission echoed Germany's call, saying all EU nations should be permanently excluded from the punishing tariffs.
“The US decision prolongs market uncertainty, which is already affecting business decisions,” the commission, the EU's executive arm, said in a statement.
Europe had lined up its own punitive tariffs on American imports, including iconic items like Harley-Davidson motorbikes, blue jeans and bourbon whiskey — but for now, instead, negotiations will continue.
Britain, the EU's second-largest economy, welcomed Trump's “positive” decision but warned against further protectionist measures from the White House.
“We remain concerned about the impact of these tariffs on global trade and will continue to work with the EU on a multilateral solution to the global problem of overcapacity, as well as to manage the impact on domestic markets,” a government statement said.
Trump on Monday said the “necessary and appropriate means to address the threat to the national security” posed by the metal imports is to “continue these discussions and to extend the temporary exemption of these countries.”
The US also announced it had finalised a trade deal with South Korea, which includes several concessions made by Seoul, including extended tariffs on pick-up trucks and a quota on its steel exports.
Washington has “agreements in principle” with Argentina, Australia and Brazil, “the details of which will be finalised shortly,” a White House statement said.
“In all of these negotiations, the administration is focused on quotas that will restrain imports, prevent transshipment, and protect the national security.”
The Trump administration has told trading partners they must make concessions, but the EU has insisted it will not negotiate without first obtaining a permanent exemption.
Extensions for Canada and Mexico had been expected, as Mexico City, Ottawa and Washington work on revamping the North American Free Trade Agreement. Canada exported over $12 billion of steel and aluminium to the United States in 2017, with another $3 billion from Mexico.
But an extension for the EU was less of a foregone conclusion.
'Won't negotiate under threat'
The EU's three largest economies — Britain, France and Germany — held crisis talks on Sunday and the French presidency said afterwards they had agreed “the EU must be ready to act” if Washington presses ahead with the tariffs.
In a strident statement reacting to the 30-day extension, the EU's executive arm said it was willing to continue dialogue but pointedly warned: “We will not negotiate under threat.”
“Any future transatlantic work programme has to be balanced and mutually beneficial,” it said.
Last year the EU exported over $7.7 billion of steel and aluminium to the US market.
London's benchmark FTSE 100 index added 0.1 percent to stand at 7,512.94 points at Tuesday's opening, amid May Day holiday closures in Frankfurt and Paris.

COVID-19
Coronavirus: What you need to know about Trump’s Europe travel ban

Deutsche Bank was Trump's primary lender for two decades, and he owes the institution more than $300 million, according to the newspaper, which cited an unnamed source as saying the German lender “has decided not to do business with Mr. Trump or his company in the future.”

The move comes on the heels of last week's violent attack on the US Capitol by Trump supporters at the president's incitement, and follows steps taken by other companies to cut ties with Trump and his businesses.

Christiana Riley, head of Deutsche Bank's US division, called the violent
siege on the Capital “a dark day for America and our democracy” in a post on LinkedIn last week.

“We are proud of our Constitution and stand by those who seek to uphold it to ensure that the will of the people is upheld and a peaceful transition of power takes place,” Riley said.

“It is my hope that these shocking events will result in a reinvigoration
of the principles our nation was built upon.”

Trump's relationship with Deutsche Bank has sparked numerous probes in the United States, including in New York, where the Manhattan District Attorney is investigating whether Trump committed financial crimes as he sought loans.

READ ALSO: 'Worlds between us': What Trump's German family's town thinks of him today