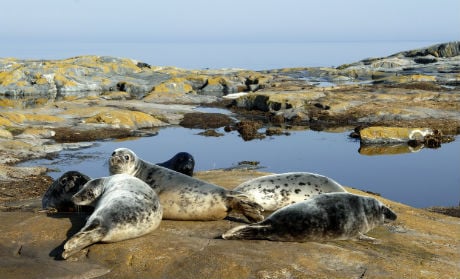 Hungry seals in the Stockholm archipelago. Photo: Lars Pehrson / SvD / TT
“It’s hard to bring in enough herrings to make our surströmming,” Ulf Lindgren, who runs the Grand Kallax saltery outside Luleå, told Swedish broadcaster SVT. “I don’t we’re going to to get in the number we need to produce what we want to.”
According to Sven-Gunnar Lunneryd, a seal researcher at the Swedish University of Agricultural Sciences, there are now 25,000 seals in the Gulf of Bothnia, with the number growing by about 1,000 a year.
“We have an explosion of seals,” he told SVT. “It’s urgent that politicians wake up and take this seriously. We need to find solutions where we can manage or hunt seals in a responsible way, and try and find a balance between seals and humans.”
Surstömming is made by adding just enough salt to herring fillets to prevent them from rotting, and then  fermenting them in barrels for upwards of six months, during which time the flesh develops an intense, almost fizzy flavour.
Japanese fermentation scholar Takeo Koizumi has found that surströmming has one of the most intense food smells in the world. Sweden’s surströmming aficionados are are passionate about its varied tones as lovers or fine wine or cheese.
Ruben Madsen, who runs the Ulvöprinsen herring saltery on Sweden’s High Coast, is expecting the season’s first herring catches to land either next week or the week after, meaning he can start fermenting the season’s first batches of his celebrated brand over the ensuing months.
He agrees that the surging seal numbers are a “gigantic problem,” even though herring stocks are healthier near him than they are further north.
“When the seals destroy so much and make it so difficult to earn a living, we are not only losing the fish, we are losing the next generation of fishermen,” he warned.
Madsen said Sweden needed to increase the number of seals that can be culled dramatically from the 500 a year allowed today.
“It’s so ridiculous. We should have up to 15,000 seals that we can shoot every year. It wouldn’t be a problem.”
“We have a woman who is a seal hunter south of Sundsvall, and she has seen that the seals are starving. They’ve eaten so much fish in the local area that there are none left for them.”
Sweden’s Environmental Protection Agency launched an investigation into the need to increase licensed seal hunting in Sweden to control the population, but despite the investigation finishing in 2013, no change has come.
According to SVT, the agency met with other government agencies in December to discuss the issue. 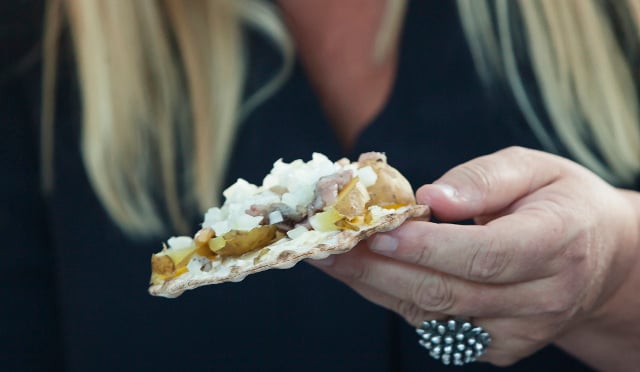 Sweden is one of just a handful of countries that currently allows seal hunting, but the rule change would mean fewer restrictions on hunting. Photo: Janerik Henriksson / SCANPIX/TT

The growing number of seals along the coast of Sweden can cause problems for the fishing industry, because the seals tend to tear apart fishing equipment and eat caught fish.

The Swedish EPA has for several years allowed for so-called protective hunts of ringed seals, harbour seals and grey seals, which means that hunts can go ahead if the animal population is seen as a threat to humans or livestock.

But in many parts of Sweden, less than half the allocated quota is met, due to a low interest from hunters.

“It's a time-consuming and costly hunt, as for the most part it needs to be done from a boat,” said Nils Mårtenson who is the head of the EPA's game management unit. “In addition, the seals are supposed to be recovered and taken care of but according to EU regulations, no products from seals can be sold.”

The seal population poses a problem for the fishing industry across the country, with grey seals predominantly in Skåne and along the Baltic Sea coast, harbour seals along the West Coast and ringed seals further north.

Seals lack natural predators, and their living environment has improved over the past ten years due to a reduction in the level of environmental toxins finding their way into the water.

Now the government has asked the EPA to look into a licence hunt on grey seals. The difference between this and the protective hunt is that the latter is more strictly regulated, and may only take place within 200 metres of a place where fishing is carried out.

A final decision on the licence hunt will come into force from April and will be in effect until January 31st, 2021.

SURSTRÖMMING
What you need to know before trying Sweden’s fermented herring
Url copied to clipboard!