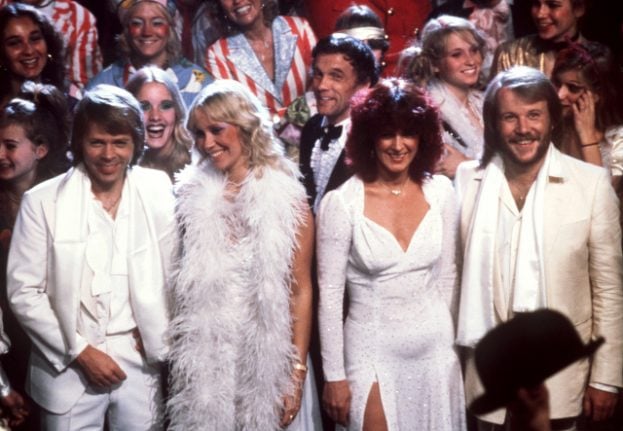 Abba in their heyday. Photo: TT

The Swedish quartet will release two new songs, according to a press statement.

“We all four felt that, after some 35 years, it could be fun to join forces again and go in to the recording studio. So we did. And it was like time had stood still and that we only had been away on a short holiday,” said the group, quoted by Swedish media.

“We may have come of age, but the song is new. And it feels good.”

READ ALSO: What you need to know about the Abba reunion

One of the new songs will be broadcast during a televised tribute show in December, produced by British broadcaster BBC and US network NBC. The song, titled 'I Still Have Faith In You', will be performed by avatars of the group. The second song is titled 'Don't Shut Me Down'.

“The songs were recorded in June of 2017 here in Stockholm. Everyone was involved, it was like in the olden days,” the group's manager, Görel Hanser, told The Local on Friday.

She said hearing the songs for the first time was “actually quite moving, it really was”.

Hanser told The Local there are no plans for more songs.

“But the two songs will be part of the hologram tour. The members of Abba won't appear physically, but their digital selves will be there performing these songs recorded by the real Abba,” she said. Agnetha Fältskog, Anni-Frid Lyngstad, Björn Ulvaeus and Benny Andersson split up in 1982 after dominating the disco scene for more than a decade with hits like Waterloo, Dancing Queen, Mamma Mia and Super Trouper.

The group, which has sold more than 400 million albums, has not sung together on stage since 1986 (with the exception of a short performance at a private party in Stockholm in 2016).

Ulvaeus has previously spoken about the virtual reality reunion show, which is expected to go on tour next year. The show will see all four members of Abba appear as holograms on stage.

In order to create the avatars, “techno artists” from Silicon Valley measured the heads of the four Abba members and photographed them from all angles.

“With videos and lipsynching, they'll create digital copies of us from 1979,” Ulvaeus said last week, referring to the year the album Voulez-vous was released.

FOR MEMBERS: How to understand Swedish politics through Abba songs

How excited are you? Share your thoughts in the comments below! Click here to become a Member of The Local.

ABBA's new album, 'Voyage' for sale in Stockholm at the start of this month. Photo: Jonatan Nackstrand/AFP

“Voyage” by the Swedish quartet of Agnetha, Bjorn, Benny and Anni-Frid racked up 204,000 chart sales in the seven days since it was launched last Friday.

Sales gave the supergroup the biggest opening week on the UK album chart in four years since Ed Sheeran’s “Divide”, and fastest-selling album by a group in eight years.

The last fastest-seller was One Direction’s “Midnight Memories” in November 2013.

READ ALSO: Abba’s new album has arrived – tell us, what do you think?

ABBA, propelled to global fame by their 1974 Eurovision Song Contest win with “Waterloo”, split in 1982, a year after their last album, “The Visitors”.

“Voyage” is their 10th number one album in the UK: only seven other acts — The Beatles, Elvis Presley, the Rolling Stones, Robbie Williams, Madonna, Bruce Springsteen and David Bowie — have had more.

The group said in a statement: “We are so happy that our fans seem to have enjoyed our new album as much as we enjoyed making it.

“We are absolutely over the moon to have an album at the top of the charts again.”

The 204,000 sales comprise 90 percent physical copies, including 29,900 on vinyl, making it the fastest-selling vinyl release of the 21st century.

The previous record holder was the Arctic Monkeys’ “Tranquility Base Hotel & Casino”, which sold 24,500 vinyl copies in 2018.