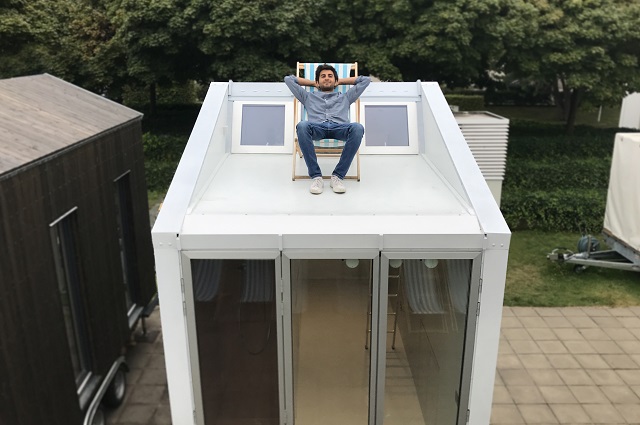 “In Italian, the word for real estate is ‘immobiliare’ which literally means ‘not movable’ — we are very fixed,” Di Chiara tells The Local, days after his 'tiny house' went on show at Milan's Design Week.

The tiny home movement is well established in the US and some European countries like Germany, but the architect thinks it might take longer for Italians to come round. People born in Italy are more likely than their northern European neighbours to stay close to their hometown throughout their lives. This is partly due to traditional community and family ties, while an unstable economy has limited the options for many young professionals.

A lot of the dialogue about housing in Italy focuses on restrictions. Priced out of a housing market where costs are soaring, the millennial generation is moving out of the parental home later than ever.

But Di Chiara says that a growing number of his peers are purposely opting out of the traditional path of putting down roots and settling down somewhere, instead choosing to travel and live abroad. Tiny houses, he argues, offer the freedom that his generation craves.

“I am 27 and I have no friends who have bought a house, and actually only a few who own a car. More and more people prioritize being able to travel and experience other cultures; sometimes they move for work, but I also know people who have given up fixed jobs and high pay in Italy in order to have more freedom,” he says.

The Italian has been fascinated by the possibilities of small spaces since childhood, when his dust allergies meant he needed a space that could be kept clean easily, and his parents gave him the smallest room in the house.

“My activity as an architect started within those seven square metres. I had to find solutions and make a small space work,” he says.

After studying architecture in Bologna, Di Chiara had dreamed of buying a loft apartment to set up home in one of the northern city’s iconic red rooftops.

“But I also wanted to travel and see different cultures around the world. I didn’t want to put down roots,” he explains. It was then that he heard about the ‘tiny house movement’, a global community of architects working in compact small spaces. “So I put this dream of having my own home onto a trailer.”

Di Chiara’s home, which you can explore by clicking and moving around the above image, differs from many of the ultra-compact living spaces already out there in two ways.

Firstly, it’s extremely flexible, so that the limited space can be used in many ways. A bed folds down from the walls, and can be transformed into a double or packed back up to be replaced by a table and chairs for four. The name of the project, 'aVOID', refers to the empty space left when all the furniture is folded back, creating room for yoga, exercise, or even parties — the architect once hosted 15 friends for a 'tiny disco'.

The second big difference is that while many nomadic, mobile, or compact homes are built for remote rural environments, aVOID is designed for urban living. There are no windows on the sides of the house, meaning it can line up against other buildings, and possibly slot in as part of a whole community of tiny houses in the future.

This is a key part of his project. Nomadic living is traditionally about taking a step back from society, but tiny houses like Di Chiara’s occupy a space somewhere in between the public and private; it's possible to set up quite centrally as an office, and open up the windows to create a very open, public-facing space.

He sees tiny houses as a possible solution to the housing crisis in many large European cities.

“On my tour, I’m showing that you can easily become a resident of very attractive cities like Berlin, Munich, Rome, Milan, where it’s very tough for young professionals to find a place. With my house, I can move where I can find a job; I’ve been in Berlin for eight months and after my tour, I’ll probably go back to Munich to work there. You don’t have to find accommodation. You become a resident the moment you arrive somewhere.”

The main issue at the moment is legislation. In Germany and Italy, you can’t officially be a resident if you live in a tiny house, but would usually be classed as a nomad, which means no access to healthcare or other public services.

Di Chiara hopes to change this, and while in Milan he spoke to one of the city’s councillors about the possibility of making it easier for people in remote homes to be properly connected to the city. “They need to be able to use libraries, hospitals, be able to vote and so on. It’s more than just camping somewhere; it’s a real way of living.”

As well as being functional and versatile, the 27-year-old says it’s important for the house to feel like home. A lot of thought has gone into the materials and lighting, chosen in order to maximize the limited space. Around 40 companies contributed to the tiny house, each installing a different piece of furniture or fitting.

“It’s a story of collaboration; lots of companies didn’t even know about the tiny house movement beforehand and now some of them are including products for this kind of house in their catalogues.”


The house in Di Chiara's hometown of Pesaro.

The next goal for the 27-year-old is to make the tiny house a possibility for even more people. The house he has now is a prototype, for which everything was custom made at a total cost of €50,000. Later, he hopes to find a company to finance a startup that can produce similar homes in an economically sustainable way, as well as speaking to banks and building more understanding of the tiny house movement, so that people can more easily get loans.

The tiny house generated a lot of interest at Milan’s Design Week, even beyond its innovative design. “Milan can be quite superficial so I thought people would only be interested in how it looked, but actually I got a lot of questions about what it’s like to live there. I invited them in to drink coffee or take a nap, and invited influencers for three overnight stays so they could answer questions from the public,” he says.

Di Chiara expects Italy to take slightly longer to get used to the idea of the tiny house compared to places like the US and Germany, because traditional ideas of community and housing are more firmly entrenched.

But he adds: “Mobility can be lots of different things – you don’t have to buy a house on wheels! Small apartments are more flexible than traditional homes, you can buy and sell them more easily or rent it out. But still, the tiny house is a very provocative statement.”