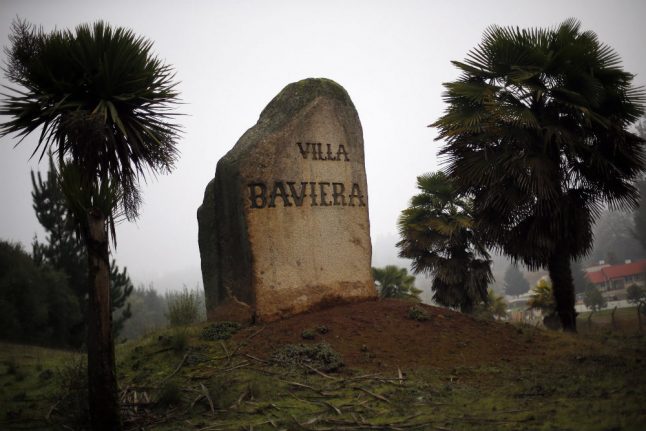 A marked stone in the Villa Baviera, formerly known as Colonia Dignidad, in Chile in 2016. Photo: DPA

Judge Mario Carroza held nearly two hours of talks with German prosecutors and representatives of the justice ministry on Monday, updating them on the Chilean probe into the sect's leaders, judicial officials said.

The visit comes as German courts are mulling an appeal filed by Dr Hartmut Hopp, a central figure in the scandal who fled Chile in 2011 after being convicted of complicity in 16 cases of child abuse.

Colonia Dignidad was a strictly-governed commune founded in 1961 by a group of German immigrants led by former Nazi medic Paul Schäfer, who had fled Germany to escape child abuse charges.

At the colony — a 13,000-hectare (32,000-acre) mountain resort located in an isolated region south of Santiago — residents were abused, tortured, indoctrinated and kept as virtual slaves for over three decades.

In 1996, Schäfer went on the run again — fleeing to Argentina to escape further abuse charges — but was caught in 2005 and jailed a year later for 20 years for abusing and torturing children and other residents.

He was also charged with collaborating with the dictatorship of Augusto Pinochet (1973-1990), whose secret police used the colony as a place to torture opponents. He died in prison in 2010, aged 88.

The scale of the atrocities only came to light after the fall of the Pinochet regime.

“We have shared information, provided certain documents and opened the way for witnesses to testify in Germany,” Carroza told reporters.

Although Berlin refused a Chilean request to extradite him, in 2017, a German court upheld the sentence, saying he should serve five years behind bars in Germany.

But with an appeal under way, Hopp remains free.

Carroza said he had requested permission to question people in Germany who could have been involved or may have fresh information on Colonia Dignidad.

The German delegation will also meet with an appeal court judge involved in the case.