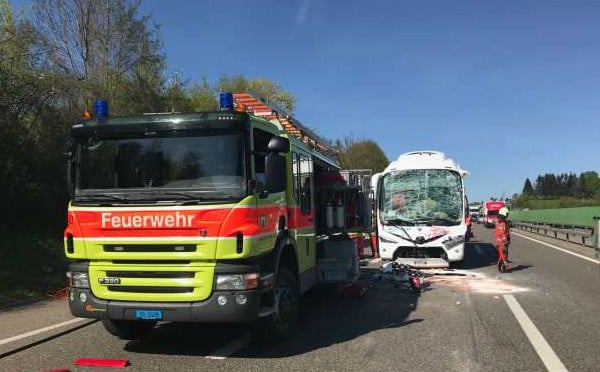 The cause of the accident is now being investigated. Photo: Zurich Police
AFP/The Local
[email protected]
@thelocalswitzer


Fifteen people were injured on Wednesday when a coach carrying tourists from Sri Lanka crashed with a two trucks on a Swiss highway, police and media said.

A tourist coach carrying 40 passengers collided with two trucks near the Winterthur–Wülflingen exit on A1 motorway not far from the northern city of Zurich, at 3:15 pm (1315 GMT), regional police said.

“Fifteen people were injured, one of them seriously,” Zurich's cantonal police said in a statement, adding that the cause of the accident remained unclear.
The Sri Lankan Consulate General in Geneva was able to confirm to The Local on Thursday that tourists from Sri Lanka had been involved in the accident.
Consulate staff had travelled to the accident site on Thursday morning, a spokesperson said.

The driver of the coach and a female travel companion riding up front were stuck and needed to be extracted by rescue workers, police said.

The driver suffered moderate injuries, while the woman was seriously injured, they said.

Twelve of the tourists were meanwhile slightly injured, as was the driver of one of the trucks, police said.

People wanting more information about the accident can contact police on +41 52 208 17 00 from outside Switzerland, police said in their statement.