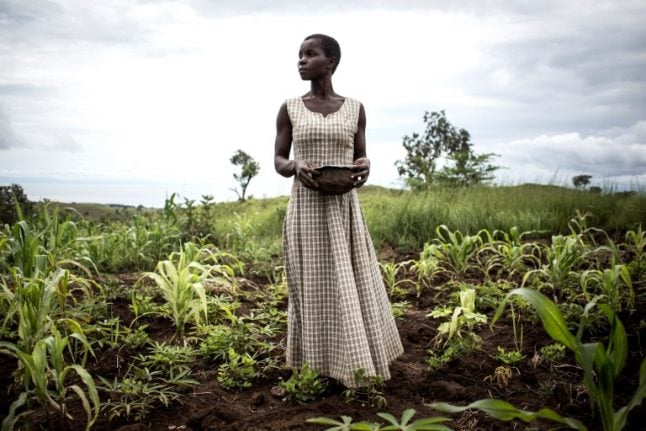 Martha, displaced with her husband and five children for six months, in a makeshift camp for Internally Displaced Persons (IDP's) and returnees on March 21st, 2018 in Kabutun. Photo: AFP

The conference comes amid mounting strife in the DRC, where a legacy of  ethnic conflict, corruption and instability are combining with political  tensions to spark fears of a bloodbath.

At the same time, “the Democratic Republic of Congo is experiencing one of the world's largest humanitarian crises,” UN chief Antonio Guterres said in a  video address to Friday's conference.

“Millions of people are suffering,” he said, warning that “the single  biggest obstacle is the lack of funding.”

But — in a position that has deepened the country's political divisions —  the DRC is boycotting the talks.

In January, the UN and the Congolese government said $1.68 billion was  needed in 2018 to provide desperately needed assistance to some 10.5 million people inside the country.

The UN refugees agency has meanwhile said another $508 million is needed to  support more than 800,000 Congolese refugees in surrounding countries, as well  as the some 540,000 refugees from the Central African Republic, South Sudan  and other countries who have fled into DRC.

UN humanitarian chief Mark Lowcock acknowledged to the conference that the  total of $2.2 billion requested was “a lot of money”.

But, he stressed, “it amounts to less than 50 cents a day for each of the  people whose lives we are trying to save and protect.”

Friday's conference got off to a strong start, with co-host Christos  Stylianides, the European Commissioner for humanitarian aid and crisis  management, pledging €77 million ($95 million) of EU aid inside the DRC this year.

And he said the EU had recently pledged another €6 million to assist  Congolese refugees in neighbouring countries.

“The human horror and despair cannot be forgotten,” he told the conference.

In all, the UN estimates that 13 million Congolese need aid, including 7.7  million who are food insecure.

“I was shocked by the scale of the suffering,” Jan Egeland, head of the  Norwegian Refugee Council, told AFP on Thursday following a recent visit to  the country.

“The Congo has been forgotten and neglected for too long.”

The DRC angrily contests the UN figures as an exaggeration and has refused  to attend the conference.

Aid bodies and NGOs are propagating a “bad image of the Democratic Republic  of Congo throughout the world,” Prime Minister Jose Makila charged on March 23rd.

The minister of humanitarian affairs, Bernard Biango, put the number of  internally-displaced people at 231,241 — just a fraction of the UN estimate  of 4.5 million.

The government has promised $100 million “to ease humanitarian distress”  and earmark $10 million to help refugees or those internally displaced to  return home.

Lowcock hailed that pledge, and stressed Friday “the government of the DRC  is providing the leadership on this crisis.”

Felix Tshisekedi, the leader of the main opposition party, the UDPS, has  called on the conference to drum up as much aid as possible

“The irresponsible attitude of the Kinshasa government reflects its  indifference to the suffering of the Congolese people,” he said.

President Joseph Kabila, in power since 2001, has been under mounting  pressure to quit since his two-term limit expired in 2016.

Elections are now scheduled for December 23, but there is much uncertainty  about whether they will take place, be fair or credible — and whether Kabila  will run or not. Dozens have died in anti-Kabila protests.

A country four times the size of France, the DRC has been chronically  unstable since it gained independence from Belgium in 1960. Two wars took  place from 1996-97 and 1998-2003, sucking in other African countries and  causing millions of deaths in violence, disease and starvation.

In eastern DRC, the humanitarian crisis is rooted in years of violence  between rival ethnic groups and militias. More recently, conflict has  escalated in the diamond-rich central region of Kasai, after soldiers killed a  local traditional leader known as the Kamwina Nsapu.

Fighting between security forces and Kamwina Nsapu loyalists has since  killed more than 3,000 people and displaced 1.4 million, according to the  Roman Catholic church.

Hunger stalks the region, as a result of successive harvests that have been  destroyed. According to the UN, some 2.2 million children in the country are  suffering severe acute malnutrition.

But obtaining funds for such a drawn-out crisis is difficult at best.

In 2017, the UN received less than half of the $812.5 million it requested  for humanitarian aid to the DRC.

And before Friday's pledging conference began, only $209 million had been  received towards the 2018 appeal for the country.