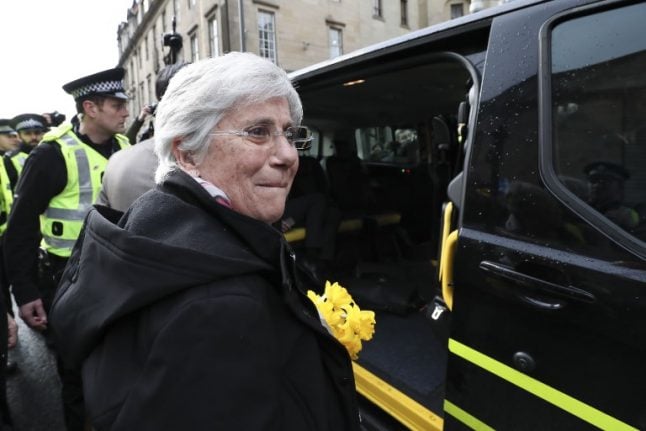 Former Catalan minister Clara Ponsati leaves a court in Edinburgh on March 28th. PHOTO: SCOTT HEPPELL / AFP
Scotland-based Ponsati accused Madrid of human rights abuses and warned they may be capable of further “evil” in their “relentless crusade to crush the Catalans' will to be free”.
Her lawyer Aamer Anwar said he cannot find any conduct in Spain's European arrest warrant which could be punished under Scots law, a key test for Scottish courts, and claims her life would be in danger if she is extradited.
Ponsati, who is currently free on bail in St Andrews, said she was in tears before she surrendered to Scottish police on March 28th.
Writing in the Sunday Herald, she said she is looking ahead to the court proceedings, which are expected to last several weeks, “with a mixture of determination and confidence”.
“I am hopeful that justice will prevail but the abuses of human rights by Spanish authorities are unprecedented — they get worse and worse day by day,” she said. “I am weary of what evil they are capable of in their relentless crusade to crush the Catalans' will to be free.”
Ponsati faces up to 35 years in prison for charges including “violent rebellion and misappropriation of public funds”.
Anwar will urge Scottish courts to reject Spain's European arrest warrant on human rights grounds, which protect the right to a fair trial, freedom of expression and thought, and the right of association, liberty and security.
“Spain appears hell-bent on ripping up its image as a modern democracy and returning to its dark Francoist past,” he said, referencing the former dictator Francisco Franco who ruled the country from 1939 to 1975.
He added: “We have concerns that if she was imprisoned in Madrid, Spain could not and would not guarantee Clara's safety and she faces a real threat to her life whether it be from the authorities or fellow prisoners.”