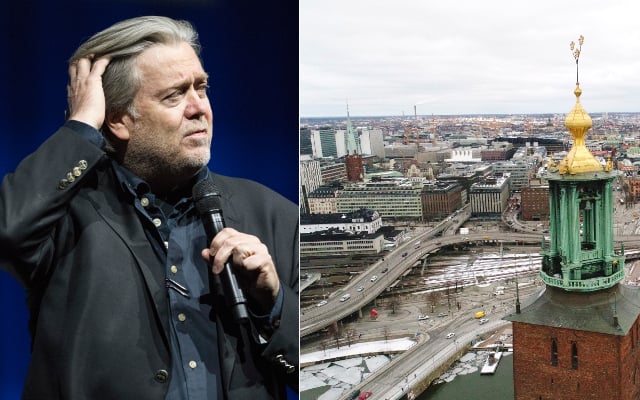 Speaking to newspaper DN in Washington DC, Bannon said he would “definitely” come to Sweden at some point this spring or early summer as part of a series of visits to Europe later this year.

Asked if he had received an invitation from the Sweden Democrats, he said he did not want to preempt the announcement but added “yes, I will definitely come to Sweden and I will come relatively soon”.

But the party itself said it was not aware of having invited Trump's former chief strategist.

“Nothing I'm aware of. I've asked around and no one else knows anything about this. The claim doesn't seem to be at all accurate,” Sweden Democrat party secretary Richard Jomshof told DN.

“There's not much more to say other than that we have not received a request from Bannon and there are no such arrangements planned,” added the party's group leader in the Swedish parliament, Mattias Karlsson, saying his immediate thought was that “it does not feel like a priority on our part”.

“We've studied the Sweden Democrats for a while. They have come from nowhere, to be a dominant, powerful political party in Sweden. And as importantly I think, they have gone from somebody that no respectable person wanted to be associated with, to a party that is really reaching out and getting many people to be comfortable being associated with them,” Bannon told DN.

The Sweden Democrats are the third biggest party in the Swedish parliament and have been climbing the polls since the last election, in which they won around 13 percent of the vote. Their support has fallen in recent months and they are currently polling at around 17 percent, down from a peak of some 20 percent.

The nationalist party was founded in 1988, evolving from far-right organizations with neo-Nazi roots, but in recent years it has worked to tone down its image as a racist and extremist group in an attempt to reach out to centre-right voters. However, it also faces a threat from the far-right fringes of the party, with two of its MPs so far quitting to join even more extremist Alternativ för Sverige, inspired by Germany's AfD.

They are still running on an anti-immigration platform ahead of Sweden's election in September. But although the Sweden Democrats invited Britain's high-profile Brexit campaigner Nigel Farage to a nationalist gala in 2016, it is not clear if it believes it would benefit from joining up with Bannon.

Donald Trump is not very popular in Sweden and Sweden Democrat leader Jimmie Åkesson never cheered his victory, only commenting that he was neither impressed with him nor Hillary Clinton.

“That they manage to produce two that rubbish candidates, it scares me a little bit,” Åkesson told Swedish tabloid Expressen at the time of Trump's victory in the US presidential election.

Only ten percent of Swedes told a poll last year that they had confidence in Trump to do the right thing in world affairs, a figure that has fallen from 93 percent during Barack Obama's final year in charge.

READ ALSO: 'History is on our side,' Bannon tells National Front meeting in France

Some of Steve Bannon's comments in DN were translated from Swedish into English by The Local and may therefore not reflect the exact words he used in his original interview, which we understand he did in English. The full interview can be read in Swedish here and an abridged version in English here.

COVID-19
Europeans harden views towards US and EU after pandemic
Url copied to clipboard!