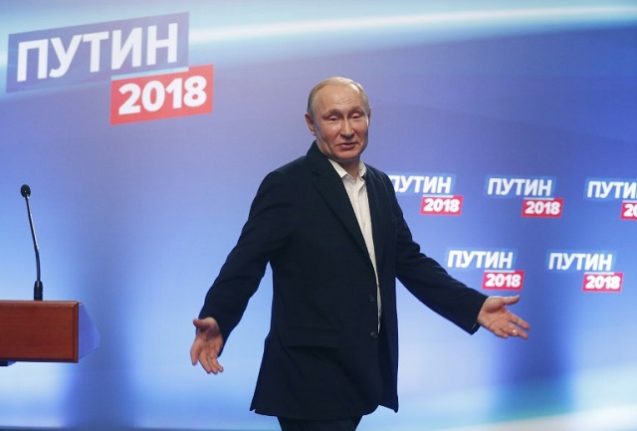 The Lombardy politician had earlier wished the Russian president good luck in the vote, describing Putin as “one of the best political men of our time” and sharing a photo of the pair shaking hands.

Salvini has visited Moscow several times and last spring signed a 'collaboration agreement' with the deputy speaker of the Russian parliament, on behalf of Putin's United Russia party. He ran in the March general election as part of a right-wing coalition led by Silvio Berlusconi, who has had a decades-long friendship with Putin and gave the Russian leader a duvet cover with a photo of the pair for his 65th birthday last autumn.

Giorgia Meloni, who leads the junior party in the same coalition, also used social media to congratulate Putin on his victory.

“Congratulations to Vladimir Putin for his fourth election as President of the Russian Federation. The will of the people in this Russian election appears unequivocal,” she wrote.

Putin obtained more than 76 percent of the vote, according to official results, though the independent election watchdog (Movement for Defence of Voters' Rights, or 'Golos') reported irregularities ranging from ballot papers being found in ballot boxes before voting started, to obstruction of cameras in polling stations.

After the victory, Putin's campaign spokesperson Andrei Kondrashov credited British Prime Minister Theresa May with the unexpectedly high turnout, saying: “Every time they accuse us of something unfounded, Russia unites.”

He was referring to heightened tension between the two countries following a nerve agent attack in the UK, which has left a former Russian spy, his daughter, and a police officer who attended the scene seriously ill in hospital.

In the tweet congratulating Putin, Salvini shared a link to a blog post disputing the idea of Russian involvement in the attack.

While the leaders of the US, France and Germany have joined the UK in saying there is “no plausible alternative explanation” to Russian involvement in the attack, Italy's first official statement on the incident made no mention of Russia.

“We are very worried by the affair of Sergei Skripal, which put many human lives at risk, and we express our strong solidarity with the British government and population,” the brief statement issued by the Italian foreign ministry on Thursday evening said.

“The use of a chemical agent banned by international conventions on UK territory is particularly serious. We are following the international debate on the affair with high attention and will offer our support to every action aimed at guaranteeing security and the respect of international law.”

Speaking to reporters on Thursday, Alfano said any response to the attack should be based on “verifiable proof”.

In a phone call to May on Friday however, Prime Minister Paolo Gentiloni said it was “legitimate” to expect answers from Russia on any possible role in the attack.

Gentiloni confirmed Italy's “full support and solidarity” and agreed on the need for “international co-operation to maintain pressure on Russia”, according to a statement from the British government.

The alliance between Italian centre-left parties was left in disarray on Sunday night, potentially meaning a landslide victory for the hard-right coalition at early general elections in September.

The leader of the centrist Azione party withdrew support for the left-wing coalition led by the Democratic Party (PD) just five days after the two joined forces, saying it could not work with left-wingers brought in to boost the alliance.

Carlo Calenda, leader of Azione, withdrew his support on Sunday after PD made another pact with smaller left-wing parties including the radical Sinistra Italiana, and new green party Europa Verde.

“You cannot explain (to voters) that to defend the constitution you make a pact with people you know you will never govern with,” Calenda told newspaper Corriere della Sera.

The news was greeted with jubilation by hard-right League leader Matteo Salvini, who tweeted: “On the left chaos and everyone against everyone!”

Giorgia Meloni, leader of the neofascist Brothers of Italy party (FdI) mocked a “new twist in the soap opera of the centre-left.”

Analyists predict the centre-left split could hand the right-wing bloc a landslide victory at the election on September 25th, with Meloni tipped to become Italy’s first female prime minister.

Italy’s political system favours coalitions, and while Meloni has a strong alliance with Salvini’s League and Silvio Berlusconi’s Forza Italia, Letta is struggling to bring together the disparate  progressive parties.

The PD is neck and neck with Brothers of Italy in the latest opinion polls, but even in partnership with Azione, the group most recently polled at 33.6 percent, compared with 46.4 percent for the right.

Political commentators said the only hope PD has now of posing a credible threat to the right-wing alliance would be by partnering with the Five Star Movement.

READ ALSO: Why has Italy’s government collapsed in the middle of summer?

However, Letta has repeatedly said this is out of the question, as he blames M5S for triggering the political crisis that brought down Mario Draghi’s broad coalition government.

“Either PD eats its hat and seeks alliance with M5S to defeat the right-wing coalition, or it’s hard to see how the right can possibly lose the forthcoming election,” Dr Daniele Albertazzi, a politics professor at the University of Surrey in England, tweeted on Sunday.

Early elections were called after Draghi resigned in late July. His government currently remains in place in a caretaker role.