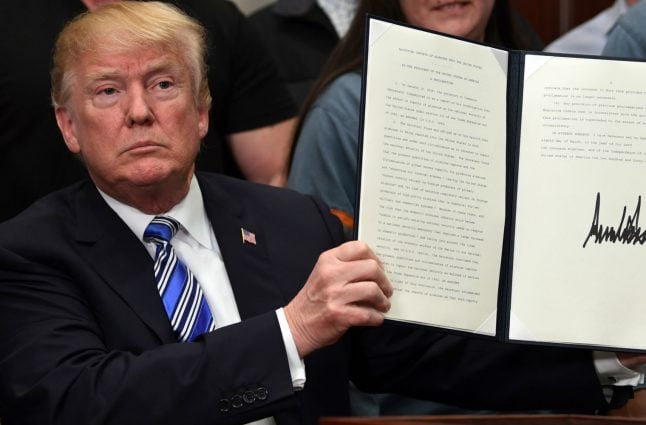 “This is protectionism which offends close partners like the EU and Germany and which limits free trade,” Brigitte Zypries said in a statement.

“We will stand firmly by the side of our companies and their workers and will now work closely with the European Commission to answer coolly and clearly” Trump's imposition of 10 percent tariffs on aluminium imports and 25 percent on steel, she added.

Thursday's announcement from the White House that it would slap levies on imports of the key metals was met with anger from major trading partners like China, Japan and the EU.

While the immediate financial impact of the border duties is small, observers fear they could spark an eye-for-an-eye spiral of countermeasures, as other capitals feel forced to act to protect their own industries.

Brussels has warned it could tax imports of politically sensitive American products like orange juice or motorcycles in response to Trump's tariffs.

But Trump said he would simply up levies on car imports from the EU in retaliation — a potentially painful blow for “car nation” and export champion Germany.

In calmer language than seen last weekend, EU Trade Commissioner Cecilia Malmstroem said Friday that “dialogue is always the prime option of the European Union,” adding that Brussels was “counting on being excluded” from the tariffs after Trump said close allies might be exempt.

But as he announced the tariffs Thursday, Trump declared that “many of the countries that treat us the worst on trade and the military are our allies”.

He singled out Germany for criticism, which books massive trade surpluses and has long failed to meet NATO defence spending targets. “That's not fair,” Trump said.

Strained relations between Washington and its traditional EU allies have grown so bad that European Central Bank chief Mario Draghi issued a call for calm in a Thursday press conference.

“There is a certain worry or concern about the state of international relations, because if you put tariffs against what are your allies, one wonders who the enemies are,” Draghi said.

“Disputes should be discussed and resolved in a multilateral framework,” rather than tit-for-tat exchanges, he added.

News of the US tariffs came as other indicators for the German economy pointed to continuing strong growth into 2018 if it is spared major upsets.

Some comfort from Berlin comes from the fact that destinations for its exports are “very diversified” around Europe and further afield, Brzeski said.

German business groups offered a mixed response to Trump's tariff assault, with the German Chambers of Commerce and Industry (DIHK) calling for a proportionate response from the EU.

By contrast, Holger Bingmann of exporters' association BGA warned that “the EU may now take steps we wouldn't want… we call urgently for level-headedness.”