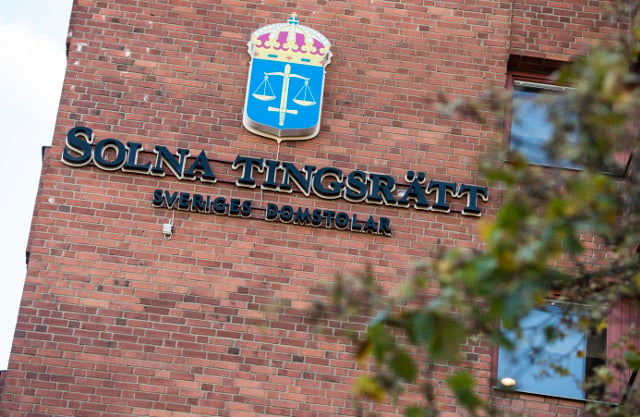 On Friday The Local revealed how a man was acquitted of an alleged assault against his wife from 2015 because his guilt could not be proven. In the ruling, pushed through by two lay judges in a split court, it was argued that it was “not uncommon for women to falsely claim they have been in assaulted” in order to get an apartment, and that the man appeared to come “from a good family, unlike hers”.

The judgment also said the woman's story was made less credible by going to the police instead of resolving the matter within the family.

Debate has raged since the details emerged, with lawyers criticising the ruling and questions raised about the role of politically appointed lay judges in swaying the decision.

READ ALSO: Has a controversial assault ruling exposed weaknesses in Sweden's use of lay judges?

On Monday night the Centre Party, which appointed the two lay judges who voted in favour of the acquittal, said the two had been expelled from the party.

“We haven't had many of these processes in the Centre Party, but it has gone quickly. We received a request to expel them from both municipal circles and the Stockholm County district. These people have also been given the chance to put forward their case,” Centre Party secretary Michael Arthursson said.

One of the lay judges, Hasan Fransson, had already posted a statement on Facebook saying he would leave his political affiliations. Fransson insisted he did not have time to read the ruling in written form before it was released, and opposed several parts of the text.

“Had I seen how it was formulated before it was sent out I would have obviously opposed,” the lay judge noted, but added that he stood by the decision not to convict the accused.

The other lay judge defended the ruling when interviewed by tabloid Aftonbladet.

Albede, who ran for parliament in 2014, has been criticized in the past because she argued in an SVT interview that certain aspects of Swedish legislation – for example divorce and inheritance rights – should include separate rules for Muslims living in the country.

Asked if the party is on top of the lay judges it has in Sweden’s courts, Centre Party secretary Arthursson admitted that some reflection is needed.

“We obviously need to be more on top of it and we'll have a dialogue with all of our municipal branches in the country about how we can get better selection routines in place. There's cause to be self-critical of why she was able to continue to represent the Centre Party,” he told news agency TT.

Interviewed by newspaper Dagens Nyheter (DN), the plaintiff in the case said she was shocked when the ruling came and did not understand why opinions of her family were of any importance.

Prosecutor Josefine Dahlqvist told The Local last week that she was unhappy with the ruling and had appealed:

“A lot of things in the ruling have nothing to do with the case and are unproven conjecture.”