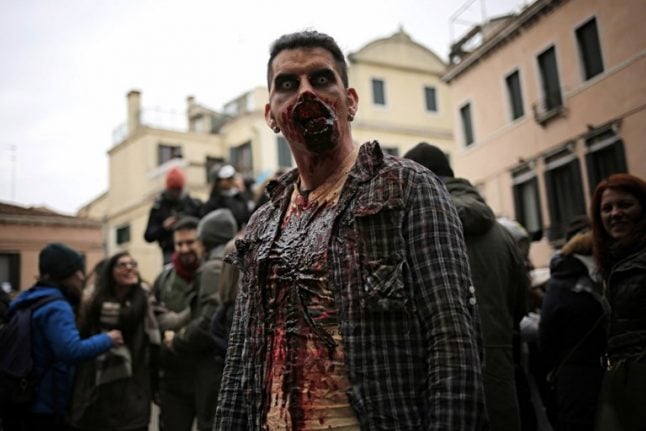 The zombies are coming! ... or is it just the Italian election. Photo: Marco Bertorello/AFP

Days to go until Italy votes: 2

That's right, the election is so close you can almost touch it.

Almost. Read Thursday's daily politics recap here to find out who Berlusconi's four heroes are (spoiler: one of them is himself…), and why former White House advisor Steve Bannon is in Rome to give a helping hand to the Italian right.

If you prefer to start at the beginning, take a look at The Local's complete guide to the Italian election here.

As the eyes of the world turn to Italy ahead of Sunday's vote, we take a look back over the election campaign. It's had twists and turns aplenty and more than a few bizarre moments, so catch up on some of the most memorable quotes that defined the campaign.

The election campaign officially ends on Friday night, so each party will be making a last ditch attempt to win the hearts, and more importantly, votes of the Italian public.

The M5S will be closing the campaign with an event in Rome, the League's Matteo Salvini will hold an event in Milan, and the Democratic Party is hosting 100 events across the country rather than one major one, with party secretary Matteo Renzi in his hometown of Florence. As for Silvio Berlusconi of Forza Italia, you'll catch him all over Italian TV.

He cut it fine, but Berlusconi has finally revealed his choice for prime minister: it's – drum roll please – Antonio Tajani, the man we knew it would be all along.

After weeks of coyly deflecting Berlusconi's heavy-handed hints, Tajani eventually confirmed that yes, he is the Forza Italia candidate for PM. So what do we know about him? Read a profile here. After the neofascist group said yesterday that one of their supporters was attacked in Livorno, now they report that a candidate suffered similar violence. Raffaele De Cataldis, one of CasaPound's candidates for the senate, was reportedly beaten up in Taranto.

Moving overseas can give you a new perspective on your country, so we spoke to several Italians living abroad to find out which issues matter to them, what it's like following the campaign from outside Italy, and who they're voting for. Find out what they have to say here.

Why are so many Italians moving abroad, anyway? With Italy still struggling to recover from the economic crisis, young people often pay the heaviest price – and they're not convinced by politicians' promises to fix things.

Young Italians often feel shut out of the political process in a country where there is little turnover in ageing political elites and the minimum age for senate candidates is 25. Many of them seek better chances abroad, and Italy's the worse for it. Read more here.

For those who stay, the prospects can be bleak. In December, Italy had the highest number of people living in poverty in Europe: 10.4 million.

The country is one of Europe's most unequal societies. The alarming rich-poor divide is spreading resentment – and it could have a decisive effect on the election. Find out why here.

What does Italy's election have to do with a Disney princess? She may be fictional, but the Frozen heroine made a last-minute appearance in the campaign when her creators revealed that they were considering giving her a girlfriend in her next film.

Italy's resident defender of “traditional family values”, Giorgia Meloni of the Brother of Italy, was predictably outraged. It “seems a bit too much to me”, she huffed, complaining that little girls “the middle of these complex things”.

Meanwhile her coalition partner, Matteo Salvini of the League, went further: “they're preparing us for a world upside down in which” – non sequitur alert! – “immigrants have more rights than Italians and in some schools they say there's no difference between male and female; some crazy teachers have boys playing with dolls and girls playing football”.

… their point being? In the words of Elsa herself: let it go.

HEADS UP: Join us on Sunday for our election live blog

This is our last daily recap, but we'll be back on Sunday bringing you the latest updates on the election as Italians go to the polls. Just go to The Local Italy's homepage and we'll be live from the afternoon and through the evening as the votes come in.

You can also follow The Local Italy and our editors, Catherine Edwards and Jessica Phelan, or head to The Local's Facebook page. We're keen to hear your opinions and predictions for the election, so get in touch!