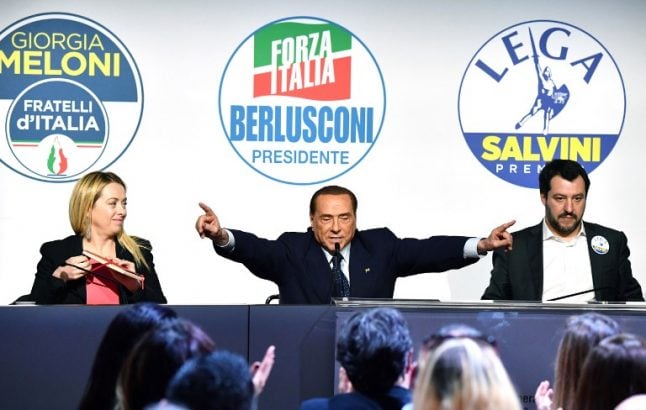 Days to go until Italy votes: 3

It's (almost) the final countdown.

Read Wednesday's daily politics recap here to find out why the Five Star Movement thinks it's close to victory, and who took the campaign down the (actual) toilet.

If you prefer to start at the beginning, take a look at The Local's complete guide to the Italian election here.

No, it's not the worst comic book ever made: it's Italian politics.

“Four heroes” is the modest name that Silvio Berlusconi chose to call himself and his three coalition allies at their final rally in Rome today. Their final and only rally: it's the first time that the leaders of Forza Italia, the League, the Brothers of Italy and We With Italy have actually appeared on stage together in months of campaigning.

It's almost enough to make you think they don't really like each other all that much. Or maybe they're just busy. In any case, Berlusconi insists that “these four heroes you see sitting around this table will win”. Some late good news for the Democratic Party, who just received figures that show Italy's GDP grew by 1.5 percent last year, its biggest jump in seven years. What's more, the public deficit fell to 1.9 percent of GDP, its lowest level in a decade.

The PD says it vindicates their policies to reform Italy's economy and drag it out of a ten-year slump. But will voters listen? Their economic track record is one of the Democrats' strongest selling points, but so far they've had little chance to air it in a campaign dominated by immigration and security.

The Five Star Movement, ever the non-conformists, thought they'd set a bold new precedent by telling voters who they'd put in government before winning a single vote. As we've been reporting, the M5S began announcing its would-be cabinet ministers as early as this week.

The announcements, including a former swimming champ as sports minister and an ex-carabinieri general in charge of the environment, left other parties perplexed. Prime Minister Paolo Gentiloni called the situation “surreal'. But Five Star leader Luigi Di Maio remains defiant.

“Some people have mocked this decision but we will be the ones laughing on Sunday,” he said at a rally to introduce the nominees.

In a continuation of the violence that has blighted the campaign for the past few weeks, a supporter of the neofascist CasaPound party says he was badly beaten last night in Livorno, Tuscany.

According to CasaPound, he was attacked by people wielding clubs as he attempted to rehang an election poster that had been torn down. The group says he had to be taken to hospital and risks losing an eye. In an effort to avoid any more violence, Rome has denied another extreme-right party permission to march in the capital tomorrow. Forza Nuova, which already plans to hold four separate rallies in the city, has been told that all its supporters have to stay in designated areas rather than attempting to parade between them.

Counter-protests by antifascists have also been banned as part of Rome's clampdown on demonstrations in the final days of the campaign.

An unofficial observer flew into Rome today, according to various sources: Steve Bannon, the former White House advisor who proved too toxic for President Donald Trump.

Bannon is reportedly “intrigued” by the election, notably the prospects of right-wing populists' success, and thinks it could be the start of a “new path” in Europe. The League's Matteo Salvini is very proud of having met Trump; would he be as starstruck by his former strategist?

Congratulations to Silvio Berlusconi, who just became a grandpa, again. His daughter Barbara gave birth last night to her fourth son, little Francesco Amos. For all his attempts to resist a dignified senior citizenship, Berlusconi is an old hand at giving grandfatherly attention by now: Francesco is his 11th – eleventh – grandchild.

Here he is showing his nonno side by wiping Salvini's face with a hankie at their press conference. IN DEPTH: So how's this all going to turn out?

Hey, we're not magicians (which is what polling experts say it would take to predict what'll happen on Sunday). But we can run down a few of the most likely scenarios.

Will the right-wing coalition win – and if so, who'll be prime minister? Or might Berlusconi peel off to form a grand coalition with the centre-left? Or will they end up doing the election all over again? Take a look at what to expect after Italy's vote.

WEIRD SCIENCE OF THE DAY: People's reaction to body odour might tell us who they'll vote for

We're serious. That's the conclusion of a new Swedish-Italian study, which found that people who are especially revolted by bodily smells like sweaty armpits, pongy feet or wee are more likely to be drawn to authoritarian leaders.

The researchers suggest that it might be rooted in a primal urge to avoid being contaminated with disease, which pushes people to avoid contact with strangers – and may ultimately translate into a preference for hardline politicians who promise to, say, build a wall between different national or social groups.

Look, who knows. If neither polls nor magic can help us, science might – so get out there, ease off the deodorant and let us know how the nearest Italian of voting age reacts.