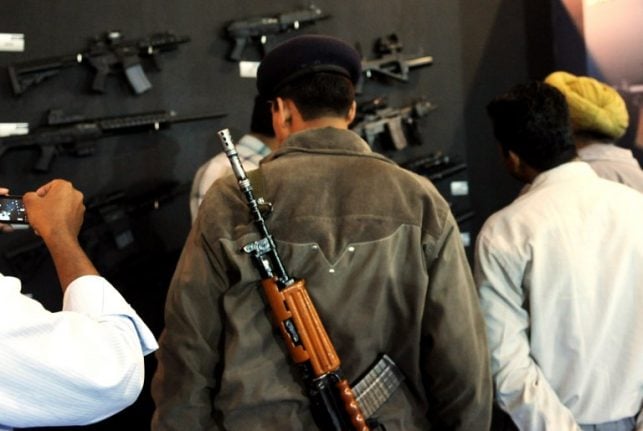 
The Swiss arms industry is experiencing a boom and the government is under pressure to loosen up rules on exports but one group of female politicians is pushing back against the idea.

Swiss arms exports climbed 8 percent to 446.6 million francs in 2017, according to official figures released on Wednesday.

Almost half of those exports went to Europe while Germany, Thailand and Brazil were the three largest purchasers of Swiss-made arms.

The increase in weapons exports comes on the back of a series of rule changes in recent years making it easier for the Swiss arms industry to sell overseas.

In 2014, the rules around arms exports and human rights violations were slackened so that a ban on weapons sales only applied in countries where there was a serious risk that those weapons would lead to human rights abuses. Exports would be approved on a case-by-case basis.

Previously, countries with a demonstrated record of human rights abuse were off limits to the Swiss arms industry.

Then in 2016, a ban on sales to countries engaged in conflict was scaled back so that only countries involved in internal conflicts were on the black list.

This meant the powerful Swiss arms industry could – under strict conditions including a ban on the sale of materials that could easily be transported for use in the Yemen conflict – once again sell to Saudi Arabia.

Now, after intensive lobbying from the arms industry and politicians involved with security issues, the Swiss government is set to go a step further and look at permitting the export of Swiss weapons to countries engaged in internal conflicts – a move the industry says is necessary to ensure it remains competitive.

But six women from six different political groups are strongly opposed to the move and plan to come out against it at the upcoming weekly Q&A session in the lower house of the Swiss parliament, Swiss daily the Tages Anzeiger reports.

The group plan to ask whether the parliament will be able to express its opinion on the issue of arms exports if the government considers loosening the current rules.

“With this collective action, we want to clearly state our serious concerns in relation to the relaxing of regulations related to arms material,” said Priska Seiler Graf of the Social Democratic Party of Switzerland.

Seiler Graf is particularly concerned that the needs of the arms industry are being placed ahead of the Switzerland’s humanitarian tradition.

Also part of the alliance is Natalie Rickli , a deputy with the right-wing Swiss People’s Party. She argues that Switzerland, as a neutral country, should not promote insecurity in other countries.

Meanwhile, Barbara Schmid-Federer, a deputy with the Christian Democrats objects to the fine print in proposed changes to the sale of Swiss arms exports. Among the proposals is one that would see export licences being valid for two years instead of the current 12 months.

The group is also made up of Sibel Arslan with the Greens, Kathrin Bertschy of the Green Liberals and Rosmarie Quadranti Teil of the Conservative Democrat Party. Group members argue the sale of arms to countries engaged in civil conflicts cannot be seriously considered “given the current state of the world”.

Denmark to deploy special forces to Mali in 2022

No marching orders: Swiss soldiers told to do military training at home

Why Biden could reverse US troop removal from Germany

Why is Switzerland holding a referendum on purchasing fighter jets?