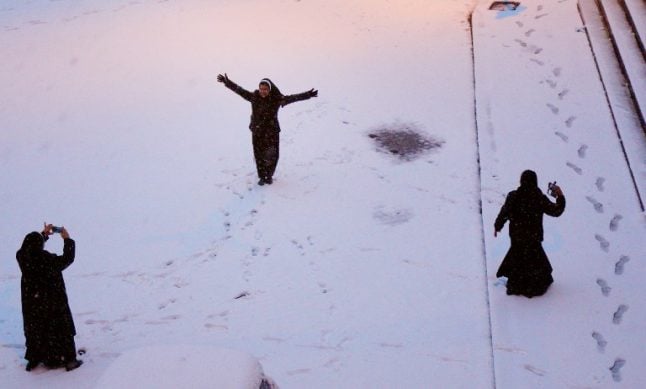 Days to go until Italy votes: 5

Even a Europe-wide cold snap can't stop this campaign.

Read Monday's daily politics recap here to find out about the possible coalitions that could be the EU's worst nightmare – or its sweetest dream – and to find out which unlikely contender is throwing his hat into the ring with less than a week to go.

No kidding. Silvio Berlusconi dropped that bombshell in response to speculation that his Forza Italia party could abandon its alliance with the far right to form a “grand coalition”, German-style, with the centre-left Democrats.

As we reported yesterday, that's said to be the outcome preferred by the EU. And no wonder: with the election expected to end in a hung parliament, the alternatives being touted are risky alliances with much smaller groups on the fringes of Italian politics.

But Berlusconi said today that grand coalitions, so beloved of Germany, are viewed in Italy with mistrust. More reassuringly for Brussels, however, he also ruled out any alliance with CasaPound, the extreme-right party that says it would join a government led by one of Berlusconi's coalition partners, the anti-immigration League.

Somewhat incredibly, just days from the election, Forza Italia still doesn't have a candidate for prime minister. Berlusconi is banned from running because of a conviction for tax fraud, and he's been uncharacteristically reserved about revealing who he'd like to be his stand-in.

Today he came the closest yet to announcing who would take the top job – while claiming to announce nothing at all. The man Berlusconi has in mind is, as many have long suspected, European Parliament President Antonio Tajani, though “I have been asked by him to put forward his name only when he gives me the go-ahead”.

So… does that mean that Tajani has given the go-ahead? Not according to his latest comments to a German newspaper, which he told that he would “like to remain president of the European Parliament”. Berlusconi, meanwhile, added the coda that he would be “willing” to stand himself in the near future, should he win his appeal against his ban from office and should a new vote be called. How gracious of him.

The Five Star Movement, on the other hand, just can't wait to announce who it would put in government. It's in such a hurry that it has already held the first meeting of its hypothetical cabinet, this morning.

The leadership is planning to tease us by releasing names gradually. The first to be announced include several academics and notably, a former carabinieri general as minister of the environment.

One of its founding members thinks so. Roberto Maroni, the current president of Lombardy, has been with the League long enough to remember when it was the Northern League – and he doesn't like what it's become.

In a column published today, Maroni blasted the party's current leader, Matteo Salvini, for losing sight of the League's original cause: greater autonomy for Italy's regions, beginning with those in north.

It's no secret that the two disagree: Maroni, one of the League's dying breed of moderates, unexpectedly announced his retirement from politics last month and has since been unabashedly critical of Salvini's nationalist agenda. Read more background on the League and its evolution here.

Even among so many memorable candidates, Lucia Annibali stands out. Until a few years ago, the 40-year-old lawyer had never considered running for office. Then her ex hired strangers to throw acid in her face.

The attack left her disfigured for life, and determined to make a difference. Now Annibali is campaigning for a seat in Parma, representing the Democratic Party and drawing attention to domestic violence. “After being attacked I thought about how I could best start again,” she says. “I had to find the best way to make the most of my work as a lawyer and realized that politics could be the right way.” Read more of her story here.

IN DEPTH: Where are all the women?

Silvio. Matteo. Luigi. Pietro. Another Matteo. Have you ever noticed that the leaders of Italy's main political movements all have something in common? No matter what they disagree on, they all share the fact they're men.

Italy notoriously lags behind other European countries on matters of gender equality. (In fact, it has a wider gender gap than Mexico, Kazakhstan, Zimbabwe or Bangladesh.) In the current government, just 31 percent of Italy's parliament is female and 28 percent of ministers are women.

Many more are determined to improve those figures next time round – and several have already made a big impact on the campaign trail. Meet five of Italy's highest-profile women politicians here.

DISTRACTION OF THE DAY: Snow

If Italian politics seem a little quieter than usual today, they are: the country is largely preoccupied with the snow and ice that has blanketed it since Monday.

That's not to say that people haven't made the weather political: the Five Star mayor of Rome, Virginia Raggi, was criticized for taking a work trip to Mexico right before the capital saw its heaviest snowfall in six years (she has since hopped on a flight back), while delays on Italy's rail network had many, er, railing about previous governments' failures to get the trains running on time. Except for Berlusconi, that is, who somehow missed the memo and chose today to take credit for building the high-speed train line between Milan and Rome.

But that aside, the weather is providing a welcome break from a gruelling election campaign. Enjoy it while you can.