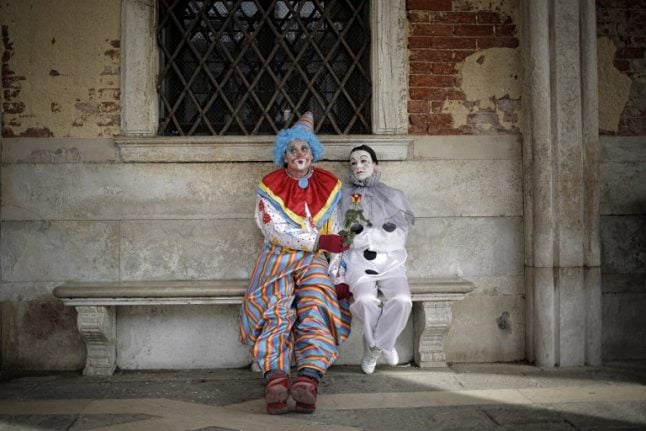 A carnival-goer in Venice (not a candidate for PM). Photo: Marco Bertorello/AFP

Days to go until Italy votes: 6

This time next week we'll know how Italy voted.

Read Friday's daily politics recap here to find out about tense protests, and the EU's Jean-Claude Juncker backtracking over fears Italy would be left with a non-operational government.

Tens of thousands of people marched in rival far-right and antifascist demonstrations across Italy on Saturday.

Police said a campaign rally by the anti-immigration League attracted some 20,000 people (closer to 50,000 if you take the party's word for it) in Milan, where antifascist protesters also marched to counter a rally by the neofascist CasaPound movement. Another antifascism demonstration took place peacefully in Rome, though a smaller rally organized by a leftwing union saw protesters throwing firecrackers at police. As we've been reporting, there has been a dramatic uptick in violence between antifascist and far-right activists in recent weeks. With the vote less than a week away and tensions running high, authorities in Rome announced today that from Wednesday until Sunday evening they are declaring the centre of the capital off-limits to any political protests without official approval.

Simone Di Stefano is the extreme-right CasaPound's candidate for PM. On Monday he said he would be open to supporting a government led by Matteo Salvini of the League, the anti-immigration, anti-EU party in coalition with two other right-of-centre parties.

Di Stefano said his party wouldn't support a government featuring European Parliament President Antonio Tajani, widely rumoured to be Silvio Berlusconi's pick for PM, or Renato Brunetta, another big name in Berlusconi's Forza Italia party. However, the CasaPound leader said he would get behind a government led by Salvini as long as it supported an exit from both the euro and the EU and a block on immigration.

Salvini, meanwhile, said that “from March 5th, I'll meet everyone”. Including CasaPound, a party that openly reveres Mussolini and patrols multi-ethnic neighbourhoods to “protect” native-born Italians.

Naturally, the European Union would prefer a different outcome.

The coalition it would rather see is a so-called grand one between Forza Italia and the centre-left Democratic Party – neither of which advocates leaving the EU – the bloc's officials say privately. According to reports today, they may be “quietly working to encourage” that result. Read more here.

The other thing that's making people nervous, in Italy and beyond, is what the election means for the economy.

Italy is taking its first steps out of the crisis that started in 2008, but its recovery is fragile and could easily be jeopardized by political uncertainty, sweeping tax cuts or reversals of the current government's reforms – any and all of which might be on the cards after the vote. Learn more about what's at stake here.

The Five Star Movement's Luigi Di Maio has accused Italy's state broadcaster of biased coverage, claiming that “Rai's news shows are giving the worst of the worst against us, perhaps because they fear losing their place”.

The M5S leader suggested that Rai was wary of his movement's proposals to change the way the taxpayer-funded network is governed.

Honestly, we feel like we're repeating ourselves here – and we don't want to be accused of bias – but yet another Five Star candidate has self-suspended themselves from the anti-corruption movement after coming under suspicion of graft.

This time it's the aptly named Patrizio Cinque (his surname means “five”), mayor of Bagheria in Sicily, who finds himself indicted on charges including fraud, abuse of office and other misconduct.

IN DEPTH: What do Berlusconi's supporters see in him?

To outside eyes, Silvio Berlusconi might look like a joke. Perma-tanned, cosmetically altered, with a string of much younger women by his side and a long list of memorable gaffes behind him, how do any Italians take him seriously? Well, to go by the polls, they do. We've analyzed how Berlusconi sells himself before; now, hear from the people who buy it.

“He's a phenomenon,” said one supporter at a Forza Italia rally in Milan yesterday. Another called him “someone blessed by the gods”. Whatever you think of Berlusconi, find out what his fans see in him here.

VIDEO OF THE DAY: A(nother) clown announces his bid to become prime minister of Italy

… only this time he admits it.

British comedian John Oliver, who hosts the satirical news round-up Last Week Tonight on HBO, on Sunday threw his hat into the ring – because “yes, Italy, my candidacy for prime minister may be a complete and total farce, but be honest: incredibly, I am far from your worst option”.