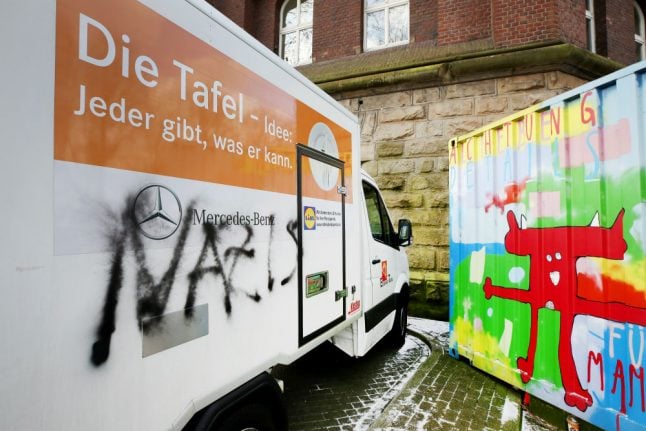 The word 'Nazis' sprayed on one of the charity's trucks. Photo: DPA

Essener Tafel charity leader Jörg Sartor said the slogans, also including “FCK NZI”, that defaced a building door and six vans would not immediately be removed because “everyone should see this”.

Dismayed by the wider controversy, he also told Bild daily he was considering “throwing it in” and resigning from his post.

The charity that serves free meals to the poor had drawn widespread criticism after it declared last week it would from now on demand German identity papers for new clients because a huge migrant influx was displacing locals in need.

Sartor, 61, had claimed that many elderly Germans and single mothers were scared of an increasingly aggressive atmosphere as the number of foreigners using the charity had risen to three-quarters of the total.

Sartor stirred further controversy by saying that some migrant groups shared a “give-me gene” and did not understand Germany's “queueing culture”.

More than 1.2 million asylum seekers have come to Europe's biggest economy since 2015 — more than half from war-torn Syria, Iraq and Afghanistan — in a mass wave that sparked a xenophobic backlash.

The charity in the city of Essen, like hundreds of similar groups nationwide, collects surplus food that would otherwise be discarded by supermarkets to serve it to the poor.

None of the other more than 900 food banks in Germany publicly said they would replicate the step, with many insisting they would help those in need irrespective of where they came from.

Graffiti sprayed on the door to the entrance of the food charity in Essen. Photo: DPA

German police and the internal security service, responsible for investigating politically-inspired offences, said they had launched probes into the graffiti spraying which occurred at the weekend.

The far-right and anti-immigration Alternative for Germany (AfD) party launched a social media campaign in defence of the charity entitled “If you fight back, you're a Nazi”.

The charity “was not founded to deal with the chaos of (Chancellor Angela) Merkel's refugee policy but to meet the demand that was already there”, it stated on Facebook.

Essener Tafel said last week it had taken the step in order to avoid friction between needy locals and foreigners that could harm acceptance of the newcomers.

The charity had announced the change locally in December and implemented it in mid-January, but it was only widely reported last Thursday, initially by the newspaper Westdeutsche Allgemeine Zeitung.

Sartor told the daily that his charity would maintain the additional demand that new clients show not just proof they receive social welfare but also German identity papers to register themselves “until the balance is restored”.

TRAVEL
What do Switzerland’s foreigners miss most during the pandemic?
Url copied to clipboard!