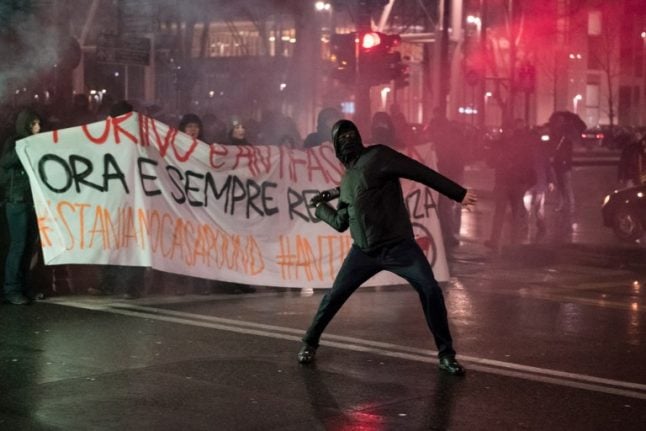 Days to go until Italy votes: 9

Single digits! It's getting real.

Read Thursday's daily politics recap here to find out about the party promising free flights to Italy and the risk of mafia meddling in the election, or if you prefer to start at the beginning, catch up on all our election coverage so far here.

Our next politics round-up will be on Monday. Until then, check our homepage for all the latest news.

… Again. Tensions remain high ahead of the election, and on Thursday a group of far-left protesters tried to break through a police cordon to reach a neo-fascist rally by the Casapound party in Turin. Several more demonstrations are planned this weekend, including what's likely to be a large march against fascism in Rome. Authorities are stepping up security in anticipation of further violence.

Everyone, Jean-Claude Juncker would like you to know that when he said Italy might find itself without an operational government after the vote, he didn't mean it like that.

The European Commission president was forced to clarify his remarks today after they provoked concern from politicians and a downturn on the Milan stock market.

“As a commission we think that there will be a government which can work after the elections,” Juncker said. Read more here.

“I'm convinced [Italian voters] will give themselves a stable government,” chimed in the Italian-born president of the European Parliament (and possible candidate for prime minister), Antonio Tajani. “Never underestimate the intelligence of the Italian people.”

The problem with being Italy's “anti-corruption party” is that you have to be squeaky clean. Unfortunately for the Five Star Movement, not all of its candidates have proved to be pristine.

The latest member to be accused of wrongdoing is Salvatore Caiata, one of the movement's candidates in the southern region of Basilicata, who is reportedly under investigation for possible money-laundering in connection with several businesses he owns. He maintains he's innocent, but chose to pre-emptively suspend himself from the M5S.

No, that's not a slogan for the anti-immigration League, though you'd be forgiven for getting confused. In fact it's the catchphrase adopted by the Five Star Movement's candidate for president of Lazio, the region around Rome.

In a Facebook post, the M5S's Roberta Lombardi said that tourism boosted the local economy, while migrants “weighed it down”.

Context: according to a study by the Idos Institute, overall immigrants bring in between €2.1 and €2.8 billion more than they cost the Italian state. Here's a fact-check of other common assumptions about immigration in Italy.

The centre-right coalition led by Silvio Berlusconi is in the lead, according to the final opinion polls, but Berlusconi hasn't yet named Forza Italia's pick for prime minister (though he's strongly implied his choice would be European Parliament president Antonio Tajani – see above).

“Matteo Salvini has a strong desire to excel in the coalition, but in the latest polls the League is four points behind us, and the leader will be chosen by the party that wins more votes,” Berlusconi said on a radio interview, in which he also described his junior coalition ally as “a bit explosive”.

When asked if he was still hoping to get a ban on holding public office overturned, the four-time PM responded: “I couldn't care less” (me ne frego).

Speaking of Salvini, his blog has been hit by a hack attack. Cyber vigilantes Anonymous posted a picture of him morphed into a pig and threatened to publish more than 70,000 emails from his readers.

This follows an attack on the League leader's Facebook page earlier this month, when hackers published posts including “I'm gay” and “If this gets a thousand likes I'll shave everything off”.

EXPLAINED: How to say 'hung parliament' in Italian, and other election vocab

Do you know your deputati from your senatori? Your sistema proporzionale from your uninominale secco?

If not, niente panico. We've compiled a comprehensive list of all the terms you're likely to hear on and around election day. And we really do suggest you memorize the phrase un parlamento sospeso, because if the polls are anything to go by, that'll be the phrase on everyone's lips after March 4th.

Find that and other vocabulary here.

TWEET OF THE DAY: 'Choose me or choose chaos'

But that doesn't mean he's afraid to dabble in social media too. Berlusconi has been tweeting prolifically throughout the election campaign, but one message from last night may stand out to British voters.

“Voting for other parties means giving life to a parliament without a majority, a paralyzed parliament. It means going back to the polls a second time. Choose Forza Italia or chaos,” the 81-year-old wrote.

In 2015, former British PM David Cameron gave voters a similar warning, below. For those unaware of how that turned out, Cameron's Conservative party did win the election, prompting him to hold a promised referendum on EU membership, which Britain narrowly voted against.

Cameron resigned, Theresa May replaced him after a chaotic leadership contest, she held another election which saw the Conservatives lose their majority, and two years after the Brexit vote, no-one's quite sure what it actually means.

Britain faces a simple and inescapable choice – stability and strong Government with me, or chaos with Ed Miliband: https://t.co/fmhcfTunbm