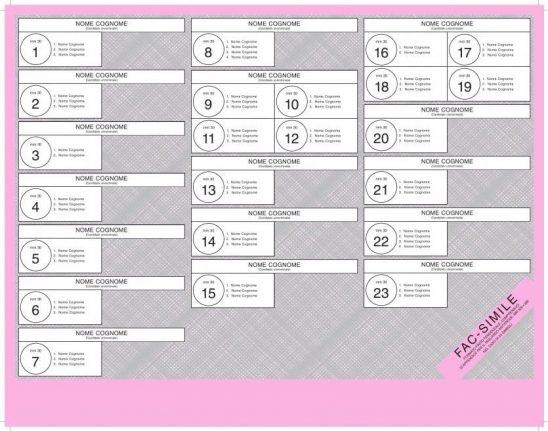 One of Italy's new ballot papers. Confusing? Kind of.

Days to go until Italy votes: 12

We've had the final polls before voting day and the overseas votes are already making their way to be counted in Italy.

Read Monday's recap here and catch up on all our election coverage so far here.

The Italian election now has its own emoji on Twitter: a ballot paper being dropped into a box decorated with the Italian flag.

“The world is watching the Italian election campaign,” the social network noted when it announced the emoji, which automatically appears when you use any one of several hashtags, including #ItalyElection2018, #elezionipolitiche2018, #elezioni2018, and simply #elezioni.

With less than 2 weeks until voting day, catch up on all @TheLocalItaly's election coverage here https://t.co/8gaLbOvz1J #ItalyElection2018

Who could have said that? Only the man who's been in them longer than almost anyone else campaigning, one Silvio Berlusconi!

“I'm not a politician, politics have always made me sick,” the four-time prime minister told a meeting of industrial leaders today. “Even politicians know that it's very far from the best of what human activity can be.”

Berlusconi loves to present himself as a humble, albeit multimillionaire, man of the people – it's one of the reasons for his enduring success. Now, as Italian voters turn away from established parties in favour of political upstarts, he's hamming it up even further. The eternal insider claiming to be on the outside? Pull the other one, Silvio.

In a campaign where others treat Europe like a dirty word, leftwing heavyweight Emma Bonino is nailing her colours to the mast (blue and yellow, natch) and saying it right out: she bloody loves the European Union.

The clue's in the name: Bonino heads a list of candidates called +Europa. Unlike the incumbent Democratic Party, she said today, her group is “more determined, more constant… and more impassioned” in its commitment to the European project.

She's right that the Democrats have avoided trumpeting their ties with Europe: in one of the EU's most eurosceptic members, where many see Brussels' policies on immigration as unfairly burdening Italy and where support for anti-EU populists is growing, coming out too strongly in favour of Europe can be toxic.

Remember that trash scandal in Campania we told you about yesterday? It rumbles on.

Vincenzo De Luca, the southern region's governor, faces calls to resign over dodgy waste management contracts that have already prompted his son to quit his post as a city councillor. Having already accused his critics of using mafia tactics against him, today De Luca announced that he was suing the head of the Five Star Movement, fellow Campanian Luigi Di Maio, for saying he should go.

De Luca's claim is that his rivals are seeking to discredit him and his party, the Democrats, days from the election. But with all this hot air, he could be doing that all by himself.

“Voting is very difficult, and the chances of error are very high. I have talked to so many people, from nurses to notaries, and it is difficult to explain it,” she said in an interview with the Ansa news agency.

Italy is using a new, never before tested electoral law this year, which is why there's a new ballot paper, and also why the outcome is anything but certain. We've explain the new law in more depth here.

Five Star Movement co-founder Beppe Grillo can always be relied upon for a quotable turn of phrase, and his latest might just be our favourite of the campaign so far.

“Don't give in to this stupid new age made up of psycho dwarves and fake TV news,” the former comedian writes in his latest blog post, a lengthy reflection on perception that concludes with him telling voters that “the choice is always yours”.

The M5S began, of course, on Beppe's blog – though recently the movement formally separated itself from Grillo's personal site as part of its new, more measured approach to this election. So sadly we won't be seeing “Down with psycho dwarves” on campaign posters any time soon.

2017 was the year of fake news, according to communications regulator Agcom, whose latest survey indicates that more and more Italians rely more and more heavily on social media for information. The way such sites display articles – driven by clicks, reactions and similarities between friends – leaves them “more exposed to the danger of disinformation, to confusion between real facts and fake news, and ideological bubbles or 'echo chambers',” Agcom warns.

That's especially alarming in an election year. From the very start of the campaign, the Democratic Party accused supporters of its rivals – specifically the Five Star Movement and the League – of spreading disinformation designed to mislead voters. Both denied any party involvement, but the disinformation's out there, whoever's spreading it.

Concern about it recently led Facebook to make Italy one of a handful of countries where fact checkers can flag disputed articles, alerting users that they may be reading or sharing fake news. Meanwhile Italy's intelligence services say they're on high alert for any suspicious cyber activity designed to sway public opinion and disrupt the vote.

Look at us, banging on about the vote and forgetting that sometimes it's best to start from the very beginning.

If you're not quite ready to tackle the vagaries of Italy's electoral law and are just wondering, say, what the president does or how many seats there are in parliament, don't panic: we've got you.

Find out all the fundamentals of Italy's political system in this handy primer.

Berlusconi told off a BBC reporter for her firm handshake, saying “no one will marry you”. He clarified he wasn't being serious, saying “you have to joke every once in a while”.