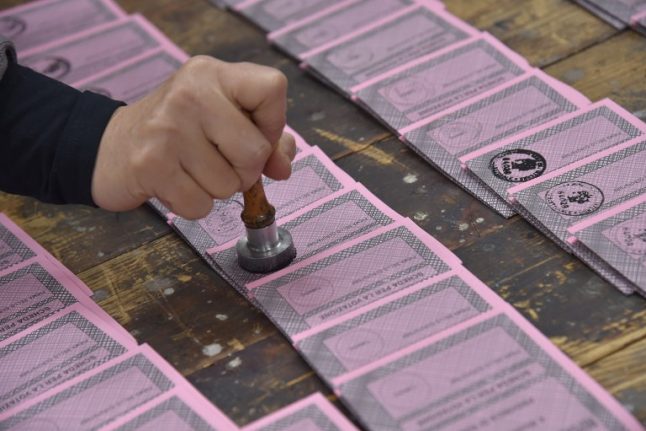 Days to go until Italy votes: 13

And so begins the penultimate week of campaigning before Italy's election. Yes, we're nervous. Can you tell?

Catch up on Friday's recap here, or have a look through all our election coverage so far here.

There were more protests over the weekend as far-right fringe parties attempted to hold rallies in Naples and Venice on Sunday.

One (Venice) went off smoothly, with police rerouting far-right supporters to keep them clear of the much large crowd of antifascist protestors; the other (Naples) ended in clashes between protesters and police, with at least 20 arrests. It follows similar tension in Bologna on Friday, when seven people were hurt demonstrating against an appearance by the head of the neo-fascist Forza Nuova.

Fascism and the opposition thereof has become a political football since the arrest of a Nigerian man on suspicion of the gruesome dismemberment of an 18-year-old Italian girl galvanized one side of the immigration debate – while a far-right sympathizer's decision to shoot six black people in so-called revenge for her death fired up the other.

On the left, Speaker of the House Laura Boldrini has even suggested disbanding explicitly neo-fascist groups, a proposal backed today by the head of her Free and Equal (LeU) party, Pietro Grasso. On the right, Silvio Berlusconi declared fascism “dead and buried” and said the real menace was… antifascism.

Beatrice Lorenzin, Italy's Health Minister and head of the Popular Civic list, says that the centre-left coalition she's part of would never team up with the centre-right. “Above all,” she told Ansa in an interview streamed live on Facebook, “there can be no possibility” of governing with the anti-immigrant, anti-EU Northern League.

It's nothing others haven't said before. Prime Minister Paolo Gentiloni, whose Democratic Party is the largest partner in the centre-left's alliance, ruled out a “grand coalition” back in January – and pointed out the cracks emerging in the not-entirely-united front presented by the Northern League and its senior coalition partner, Silvio Berlusconi's more centrist Forza Italia. The two parties' differences of opinion on everything from the euro to who should be prime minister has some wondering if their alliance – which is leading the latest polls – would survive longer enough to govern.

The more stable option, in fact, might just be… a grand coalition between Forza Italia and the Democrats. Would they? Could they? It depends just how “never” never really means.

Today in What Have the Five Star Candidates Done Now, it's a former hero's turn to be disgraced. Coast Guard Captain Gregorio De Falco, who found international fame when he told the cowardly captain of sinking cruise liner the Costa Concordia to “get the fuck back on that ship”, recently went from guarding coasts to running for the Five Star Movement (M5S) in Tuscany. He was one of their poster boys: someone who'd proved their mettle outside politics and wanted to bring some of that decency into parliament.

Well. Now De Falco stands accused of hitting his wife and daughter. He denies ever being violent, but the suspicion alone is enough to tarnish that shiny Coast Guard hat. It's a curse that's struck several of his party's candidates in recent days, with some accused of financial misappropriation and others exposed as secret Freemasons. Insert your own metaphor about sinking ships [here].

As if suspected corruption involving garbage weren't nasty enough, now there's mud to be slung too. It involves a local scandal in Campania, where the son of the regional governor resigned over the weekend amid allegations that he abused his position as a city budget councillor to profit from contracts to manage waste.

The son, Roberto De Luca, denies wrongdoing. The father, Vincenzo De Luca, says it's all a plot to discredit him and the Democratic Party, and accuses the Five Star Movement of stirring the pot.

This afternoon he released a furious video in which he lashes out at just about everyone – journalists who reported the story, the M5S, Pietro Grasso for calling an anti-corruption rally in Naples – and inviting his opponents to take him on live on TV.

Italy's ageing masses become more popular than ever in election years, as politicians count of senior citizens to turn out at the polls.

Silvio Berlusconi – himself of pensionable age – has traditionally proved the master of courting the grey vote, but today PM Gentiloni gave it a try: he promised to exempt an extra 350,000 over-75s from paying the TV licence fee. We can't confirm whether it applies to 81-year-old Berlusconi.

Speaking of campaign pledges, cutting old folks' TV bills is pretty tame compared to some of what's been promised. The Democratic Party says it will eventually scrap the licence fee altogether, the Five Star Movement is offering everyone a universal basic pension, the Northern League wants to reopen brothels, while Forza Italia is dangling the prospect of cheap pet food and subsidized vet care for that all-important animal-lover vote.

What else have Italy's political parties promised voters? Find out here.

VIDEO OF THE DAY: The education minister schooling us on the dancefloor

Valeria Fedeli could evidently teach us a thing or two about the quickstep. Here's Italy's minister of education making her way around the dancefloor during a recent campaign stop in Tuscany. No reason, we just think she's rather good.