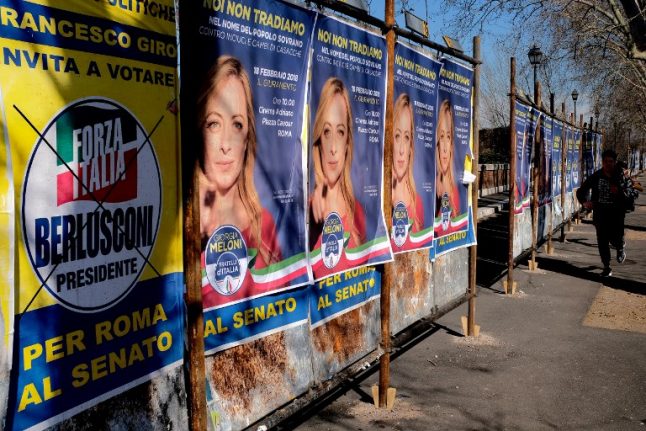 Days to go until Italy votes: 16

Catch up on yesterday's recap here, or have a look through all our election coverage so far here.

NB: We'll be taking a break from rounding-up over the weekend, but check our home page for the latest news.

It's a poll party this Friday with a rush of opinion surveys conducted over the past few days, the last to be published before the vote on March 4th. The TLDR of it all is that the centre-right coalition is leading, with between 35  and 37 percent; the Five Star Movement is the single most popular party, with around 28 percent; while the centre-left is sliding somewhere between 28 and 34 percent, with the incumbent Democratic Party on as little as 22 percent by some estimates.

Remember, Italian polls are notoriously unreliable, so don't place your bets just yet. It also seems worth mentioning that another survey this week found that around two thirds of Italians didn't know the name of a single candidate in their constituency.

Send a neo-fascist to Italy's student capital and you have to expect some pushback. There's a reason they call Bologna “la rossa” and it's not to do with its red bricks. So it's not entirely surprising that there was trouble today between police and protesters objecting to a planned appearance by the head of Forza Nuova, an extreme-right party which called a rally in Bologna this evening.

Anti-fascist demonstrators turned out in anticipation and were met by police in riot gear. At least four protesters and one officer were injured.

If you were looking forward to a televized clash of the Matteos – Salvini, head of the populist Northern League, and Renzi of the Democratic Party – prepare to be disappointed. Salvini, who faced off with Speaker of the House Laura Boldrini a few days ago, today declined – emphatically – the opportunity to go head to head with the PD's former prime minister, saying it was “too late” to interrupt his campaign plans.

That leaves a grand total of zero big TV debates coming up, a situation that Renzi called “absurd”. Luigi Di Maio of the Five Star Movement thinks it's beneath him, Renzi lamented, while Silvio Berlusconi only talks to old showbiz pals “and his memories”. Zing! Shame he won't get to use lines like that against his opponents.

What's keeping Salvini too busy to talk? He's on the stump in the south of Italy, a fact that would have had some of his party's earliest supporters choking on their cotoletta alla milanese. While the movement began as a party by northerners, for northerners, Salvini has dropped the geographical origins from its name and reached out to the very southerners his predecessor once railed against. If they respond, it could be a profound shake-up in Italian politics.

… That won't happen though, at least if you listen to Prime Minister Paolo Gentiloni. The Democrats' incumbent met German Chancellor Angela Merkel today and assured (her? us?) that “I don't see any risk of Italy having a government with populist, anti-European positions”. That's settled, then.

The Five Star Movement is struggling to claw back its claim to integrity as the party against corruption and cronyism after days of embarrassing revelations about its members. Leader Luigi Di Maio today vowed to sue three of its candidates who were found to belong to the Freemasons, which is against the party's own rules. They've already been expelled; now, Di Maio says, they'll be cited for damaging the M5S's reputation.

To the tune of Salt-N-Pepa: “Let's talk about concrete things…” That's the plea from the association of Italian industry, Confindustria, which today pleaded with politicians to please, please make some real proposals. Promises are notoriously cheap during election season and they've been flying thick and fast, some less credibly than others.

Meanwhile the Worldwide Wildlife Fund wants Italian voters to prioritize environmental issues this election, launching a campaign today that urges people to vote for nature, vote for the sea, “vote for wolves”. We didn't realize they were on the ballot.

IN DEPTH: Who are all these people?

We're trying to keep it relatively simple and focus on the main players in this year's election. But Italy has a bunch of smaller parties on all sides of the political spectrum – and with majorities hard to come by, some of them could end up playing a crucial role in a coalition.

Come, wade through the alphabet soup of party acronyms with us in this introduction to Italy's smaller political movements. We promise to make it as easy as A-B-C.

QUOTE OF THE DAY: “I’ve heard a lot of fanciful campaign promises in my life, but the most fanciful is the promise to expel 600,000 migrants…. How? With parachutes?”

That's Emma Bonino, grande dame of leftwing Italian politics and head of a list of pro-Europe candidates, reflecting on the centre-right's pledge to kick out hundreds of thousands of undocumented immigrants. “In 15 minutes,” no less, according to Matteo Salvini.

Bonino has a point: in reality, deporting people is a long, slow and difficult process – which is not, of course, what anti-immigration voters want to hear. We're just worried that her sarcastic suggestion of dropping people out of planes might give them ideas.

The infaticabile Emma Bonino on #Italy’s current election race: ‘I’ve heard a lot of imaginative campaign promises in my life, but most imaginative is promise (of Italy’s right) to expel 600,000 migrants….How? With parachutes?’ @Stampa_Estera #CBC @emmabonino pic.twitter.com/6HvUDWjDkC