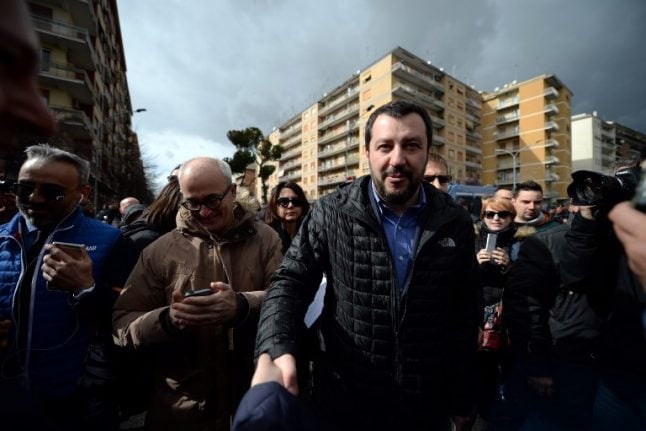 Matteo Salvini on the stump in Rome in March 2016. Photo: Filippo Monteforte/AFP

The ancient city of Matera in the Basilicata region, the historic centre of which is a Unesco World Heritage Site, hosted the party's leader Matteo Salvini, who has dropped its traditional ire towards “profiteering” southerners in favour of railing against what he called a “migrant invasion”.

“Those in Matera who choose the League choose order, rules, cleanliness … and above all one concept: Italians first,” said Salvini, under whom the League has dropped “Northern” from its name ahead of next month's general election.

“We are the League, you've seen our electoral logo, right?” Salvini told AFP when asked what had become of the Northern League.

The League is firmly established in the north but due to its past anti-southern rhetoric struggles for votes in places like Matera.

Salvini-backed candidates gained just 1 percent of votes in Matera during the 2015 municipal elections and polls predict between 5-6 percent for him in southern Italy on March 4th.

The League's tactic to win voters is to beat an ever-louder drum against immigration, one of the dominant issues in this year's election, and target the Brussels bureaucracy.

Over 690,000 migrants have arrived in Italy by boat since 2013, and Salvini has been pushing for those he calls “irregulars” to be sent home.

“So many people have asked me to do in their towns what we have done in the places where we govern,” added 44-year-old Salvini, before launching into a salvo against the governing centre-left Democratic Party (PD), which is expected to lose power come polling day.

“Here the PD has caused serious damage over the years. Immigration is out of control, the wealth of this area has been pillaged and nothing helps the region,” he said.

“I'm very happy to bring our battle for security, identity and autonomy to 60 million Italians and not anymore just a part of the country,” added Salvini. Salvini's visit to the 2019 European Capital of Culture passed without incident but he was largely treated with indifference.

However, his populist re-brand has seduced some in the land where the party's firebrand founder Umberto Bossi would never have even thought of setting foot.

“Salvini and the Northern League started with the difference between north and south, calling us thieves and profiteers,” said 39-year-old coach company employee Vincenzo Pugliese, who says he has been paid irregularly for the last three years.

“But Salvini has changed and we hope to find a solution to our problems,” Pugliese said, adding that he would vote for the League if it meant finally being paid every month.