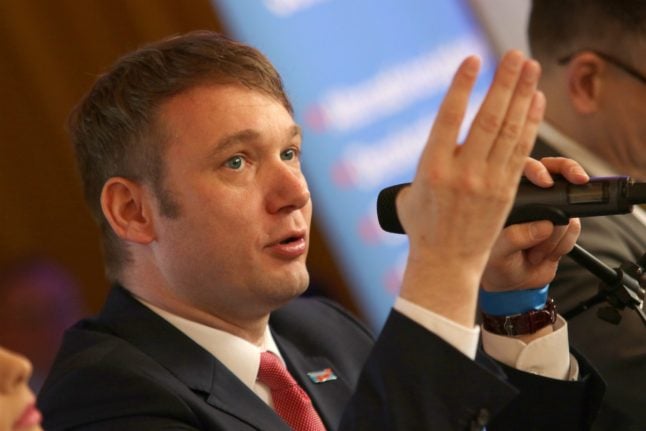 The latest controversy sparked by the anti-immigration Alternative for Germany party came as Turkish Prime Minister Binali Yildirim was Thursday due to meet Chancellor Angela Merkel in Berlin on a visit meant to improve frayed relations.

The AfD — which entered Germany's parliament with almost 13 percent of the vote last September — often makes headlines with hate speech before usually backing away from the most incendiary comments.

In the latest case, a lawmaker in the formerly communist eastern heartland of the party, Andre Poggenburg, Wednesday attacked the Turkish group for its criticism of German plans for a new “homeland” ministry.

Poppenburg, who is state leader of the AfD in Saxony-Anhalt said Germany needed no advice on its culture and history from Turks who he said bore responsibility “for their own genocide”, the mass killings of Armenians in the World War I-era.

“Are they crazy?” he told several hundred mostly-male AfD supporters in Nentmannsdorf, a village near Dresden.

“These camel drivers should go back to where they belong, far beyond the Bosphorus, to their mud huts and multiple wives.”

Gokay Sofuoglu, chairman of the Turkish Community in Germany organisation, which represents the three-million-strong minority, said it would take legal action under hate speech laws.

Poggenburg, the AfD leader in the state of Saxony-Anhalt, later defended his comments as “pointed political satire”.

He claimed the language was acceptable on Ash Wednesday when German politicians of all parties traditionally make gloves-off remarks about each other.

A regional politician of the far-left Die Linke party, Rico Gebhardt, said the comments evoked those of Nazi propaganda chief Joseph Goebbels and were “inexcusable and a shame for a civilised country”.

AfD national leader Joerg Meuthen said the racist comments “clearly went too far and should not have been made”.

This is not the first time that Poppenburg has been in hot water over his contrvosersial statements. In June details of last year a Whatsapp chat that he was involved in were leaked to the media.

In the chat between AfD members, the 42 year old said that “Germany belongs to Germans” and called for the “expansion of external borders”.

The controversy follows public anger against another AfD member, Peter Boehringer of Bavaria state, after reports of a foul-worded group email in which he had allegedly defamed Merkel as a prostitute.