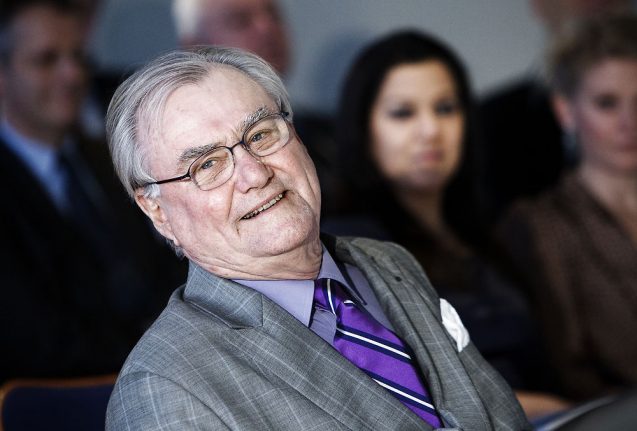 The prince had been transferred from Copenhagen's Rigshospitalet to Fredensborg Palace on Tuesday to spend his “final days”.

“His Royal Highness Prince Henrik died Tuesday, February 13th at 11:18pm at Fredensborg”, north of Copenhagen, surrounded by his wife and their two sons, the palace statement said.

Having been in hospital in Copenhagen since late January for a pulmonary infection and a benign tumour in his left lung, the prince's condition was reported to have seriously worsened on Friday, with the couple's son and heir to the Danish throne Crown Prince Frederik returning from the Winter Olympics in Pyeongchang to be with his father.

He spent the first five years of his life in Vietnam, then French Indochina, where his father ran businesses founded by his grandfather, Henri de Laborde de Monpezat, at the turn of the century.

The family moved to France in 1939, where the young Henri attended a Jesuit boarding school in Bordeaux, before later returning to Hanoi to study at the city's French preparatory school.

He studied law and politics at Paris-Sorbonne University as well as at the French National Institute for Oriental Languages and Civilizations.

After military service with the French Army in the Algerian War between 1959 and 1962, he joined the French Foreign Affairs ministry in 1962 and worked as a secretary at the embassy in London from 1963 to 1967.

He married Margrethe, then crown princess, in 1967. With a jovial face framed by understated glasses, the 83-year-old prince had a reputation as a bon vivant who enjoyed cooking, art and wine. He had a keen interest in poetry and translated several works of French literature into Danish.

In addition to his mother tongue, French, the prince also spoke English, Chinese and Vietnamese, as well as Danish, though he was sometimes teased for his French accent in Danish by media and citizens in his adopted country.

Henrik, who retired from public service in January 2016, said last year that he did not want to be buried next to his wife, thereby breaking with the tradition of burying royal spouses together in Roskilde Cathedral west of Copenhagen. The statement issued by the royal palace on Wednesday morning did not say where the prince would be buried.

His failing health had been well-documented in recent weeks.

He was hospitalised in Copenhagen in late January for a pulmonary infection and a benign tumour in his left lung, and was diagnosed with dementia in September 2017.