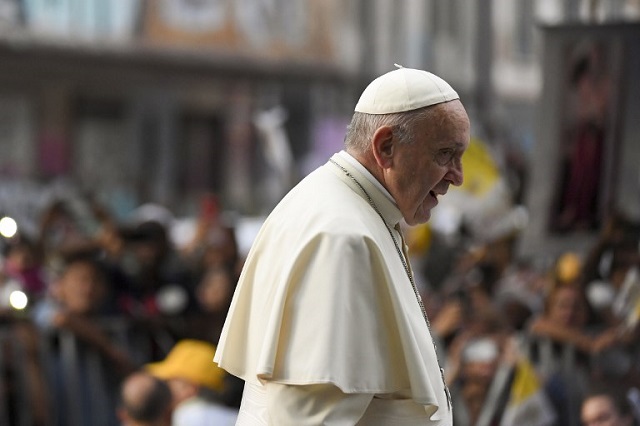 Pope Francis smiles at the faithful from the Popemobile in Santiago. Photo: Eitan Abramovich/AFP

“I think we are at the very edge,” the pope told reporters aboard his plane when asked about the threat of a nuclear war in the wake of a recent string of tests by North Korea and a false missile alert last week that sparked panic in the US state of Hawaii.

“I am really afraid of this. One accident is enough to precipitate things,” he said.

The pope landed in Santiago late Monday on his first visit to Chile since becoming pope, and his sixth to Latin America.

The 81-year-old Argentine pontiff will find a very different Chile to the one he first encountered as a student priest in the 1960s.

Preparations for the visit have been overshadowed by a recent report that almost 80 members of the Chilean clergy have been accused of the sexual abuse of minors since 2000, more than half of them convicted by a Vatican court.

Protests are expected over Francis's appointment of a bishop in the southern city of Ororno who is accused of covering up for Fernando Karadima, an influential priest whom the Vatican convicted of abusing children in 2011.

The organization “seeks to stop child sexual abuse by the clergy,” said one of its founders, Jose Andres Murillo.

The body aims to form a group of prosecutors “to bring to court these crimes against humanity,” said Sara Oviedo, former vice president of the UN Committee on the Rights of the Child.

During his three days in Chile, Francis will meet with victims of the military dictatorship of Augusto Pinochet, while there are no formal plans to meet victims of pedophile priests. Bachelet, who will meet Francis on Tuesday, has called on Chileans to welcome the pope, though a positive reception may not be universal.

On Friday, five Catholic Churches in the capital were attacked — three with firebombs — by what police said was an anarchist group. Demonstrations are planned by feminist and gay rights groups. The highlight of the three-day visit will be an open-air mass in a Santiago park on Tuesday.

At another mass at the airport in Temuco, the capital of the impoverished southern Araucania region, Francis is expected to draw attention on Wednesday to state persecution of the indigenous Mapuche people and also meet members of the community.

The Mapuche — some seven percent of the Chilean population — inhabited a vast territory before the arrival of Spanish colonists in 1541, and have long protested the loss of ancestral lands. During his visit to Chile, the pope will also meet representatives of the poor and young people, as well as visit a women's prison.

Authorities expect nearly a million Argentines, Bolivians and Peruvians to visit Chile to see the pope.

Francis sent “warm greetings” to his native Argentina in a telegram to President Mauricio Macri as he flew over the country on his approach to Santiago, though he made no mention of a much-awaited visit.

The former Archbishop of Buenos Aires has now visited all of Argentina's neighbors except Uruguay on official tours — Brazil, Bolivia, Chile and Paraguay. Elsewhere in Latin America, he also traveled to Colombia and Ecuador.

The absence has raised questions in the Vatican and in Argentina. Many consider that Francis's homilies would be interpreted as carrying more political weight at home than may be acceptable, and — particularly given the pope's defense of the poor — may be seen as pointed political attacks against Macri's market-friendly austerity.

On Thursday, the pope will travel to Iquique in northern Chile, where he will preside over another open-air mass, on the shores of the Pacific Ocean, before traveling on to Peru's capital Lima.

Peru is in the throes of a political crisis sparked by a controversial pardon for ex-president Alberto Fujimori, who was serving a 25-year sentence for human rights abuses, as well as another abuse scandal involving the clergy.