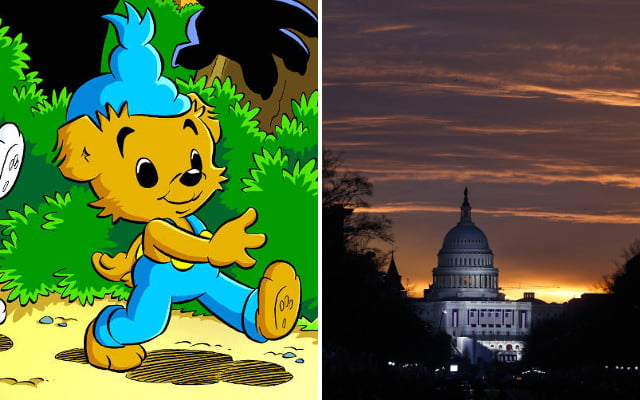 Bamse (left) made an unlikely appearance in a US Senate paper. Photo: Bamse/Egmont & John Minchillo/AP

The 200 page long report, produced by the staff of Democrat Senator Ben Cardin for the US Senate's Foreign Relations Committee, details what Cardin calls a “relentless assault to undermine democracy and the rule of law in Europe and the United States” from Putin’s government.

It also looks at European countermeasures to Russian interference, which is where Bamse comes in. On page 111, the report turns its attention towards Swedish efforts to raise awareness about and counteract unreliable news stories, noting that the Nordic nation has introduced teaching in its primary schools on digital competence “including how to differentiate between reliable and unreliable sources”.

“Even Bamse the Bear, one of Sweden's most popular cartoon characters, has been recruited to help children learn about the dangers of fake news and the need to cross check sources of information,” it continues.

The report cites The Local's articles on the two initiatives from 2017. At the time, Bamse's editor in chief Charlotta Borelius explained that teaching children about the phenomenon of fake news was a natural step for the comic, which has always looked to inform as well as entertain.

“You have to be critical of sources, and you have to learn that at an early age. Through drawing attention to that subject we also hope that some parents will get involved and discuss it with their kids,” Borelius told The Local.

READ ALSO: Why Bamse is going to teach kids about fake news

Sweden's Education Minister Gustav Fridolin also argued that children need to learn source criticism from their early years if they are to be adequately equipped for modern digital society.

“We need basic knowledge in reading, writing and numeracy so we can't be tricked, but we also need to advance our criticism of sources to the same level as we previously taught students about scientific theory for example. You already need to have your first taste of this today at about the age of ten.”

Along with international media attention and a place in a US Senate report, Bamse’s efforts to combat fake news also won him – or rather, his publisher – a major prize. In November, the comic was named popular press magazine of the year by the Swedish Magazine Publishers Association (Sveriges Tidskrifter).

The jury argued Bamse “educated adults and children in an innovative and punchy way about one of the year’s most important issues, source criticism” and therefore deserved the prize.