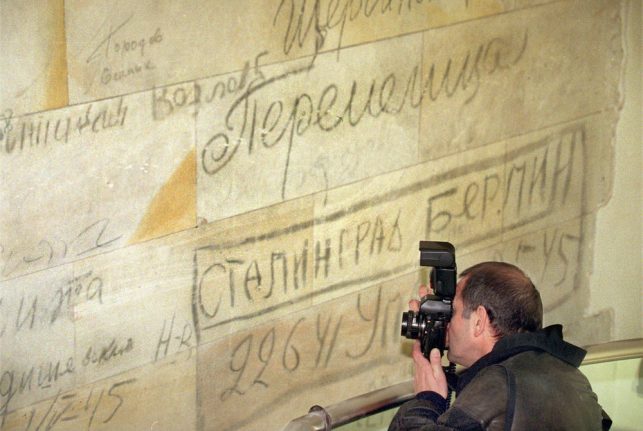 A journalist in 1998 photographing words written by Russian soldiers in the Reichstag. Photo: DPA

When the parliament building was restored by British architect Norman Foster after national reunification in 1990, German leaders opted not to sandblast away the taunts, insults and notes for posterity inscribed by the Soviet troops who fought Adolf Hitler's armies into the heart of the capital.

“You got what was coming to you, you sons of dogs,” reads one. “You reap what you sow,” says another, outside Chancellor Angela Merkel's parliamentary office.

An obscene sexual threat against Hitler remains in a spidery scrawl high on a wall in the main eastern corridor.

Most of the inscriptions, made with charcoal from the Reichstag's charred rubble and chalk used on military maps, simply feature names, dates and march routes leading soldiers to the decisive Battle of Berlin in 1945.

One German woman, 68-year-old Karin Felix, has made it her life's work to trace the people and stories behind those hasty scribbles, in a surprising and deeply personal mission of reconciliation at a time of heightened tensions between Russia and the West.

She has systematically documented and translated the graffiti and collected around 30 soldiers' stories in a book she hopes to have published in German, Russian and English.

'All the rage and joy'

“You have to think about what war does to people. They were almost children when they went to battle – 15, 16, 17,” Felix told AFP on a walk around the building's plenary level, where most of the around 100 metres of marked wall space can be found.

“Through my work I've come to learn what the soldiers went through and when they got here, all the rage and the joy that that dark time was over came out in the graffiti.”

The long-hidden messages inside came to light in 1995 as renovation work began, with all the “I was here” drama of cave paintings.

Foster, along with German officials and representatives from the Russian embassy, decided to restore as many of the tags as possible, while obliterating some of the most offensive.

Felix, now a great-grandmother, is neither an academic nor a diplomat.

She learned fluent Russian growing up in communist East Germany and met several of the old soldiers and their children leading tours through the Reichstag, where she worked for a quarter century before retiring in 2014.

One, Boris Zolotarevsky, was also just a teenager when he began the long march to Germany, culminating in the storming of the Reichstag.

Before his death a few years ago, he told her of his fear during the nightmarish final battle, in which 2,000 Russians and several hundred German soldiers are believed to have died, and how he saw leaving the victors' traces today as a sign of national strength.

“He said he was pleased how lovingly the graffiti were preserved, and that Germany seemed to be the country that had learned the most from the war,” Felix said.

Walking down the hallway, she pointed to a heart pierced with an arrow with two names inside.

“Anatoly never forgot his Galina and probably would have preferred to smooch her on a park bench than to join the stupid war,” she said with a smile.

“They had other dreams, just like our soldiers. But orders were orders.”

'What the walls say'

Although the Reichstag's strategic importance was minimal as it had been home to the parliament that Hitler neutralized, Joseph Stalin targeted the imposing monument as standing for the Nazis' might.

“It became the symbol of winning the war,” Berlin-based US historian Michael Cullen, who has published several books on the Reichstag, told AFP.

“The Russians didn't think of the Reich Chancellery – where power was really held, where Hitler stayed until April 30th, 1945 and where he committed suicide (in an adjoining bunker) – as a major symbol. It was just taken.”

After the war, hasty repairs in the 1960s saw the graffiti covered up with plasterboard, a decision made in the context of the Cold War, Cullen said.

“People were sick of seeing the war, whether it was Nazi symbols or Soviet graffiti. They wanted a fresh start,” Felix added.

“No one – not even Foster – knew how many inscriptions were still there.”

The decision to keep them was controversial, with the nation's shame and the trauma of mass rapes of German women by Red Army troops still raw decades after the war.

However “remembrance culture” prevailed – a philosophy that has only gained in prominence since Berlin became the German capital again after decades of division.

The urban landscape is still filled with bullet holes and shrapnel scars from the war's final battles, as well as Holocaust memorials large and small as gestures of atonement – an approach only the far-right AfD party has openly challenged.

Felix has little interest in geopolitics and said her work transcends the relations of specific governments.

“I don't like grand gestures. This is about people with feelings and preserving what they – and the walls – have to say.”