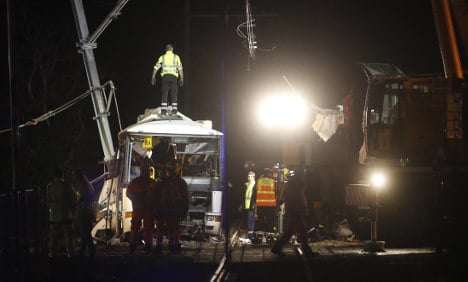 Five children were killed and 20 people injured, several seriously, when an express train smashed into a school bus on Thursday evening at a level crossing in the village of Millas near the city of Perpignan.

As villagers came to terms with the tragedy, police continued to interview eyewitnesses.

“There are witnesses who say the barrier was closed and others who say it was open. We have not finished the investigation,” state prosecutor Xavier Tarabeux said.

The bus driver, a 48-year-old woman who was severely hurt, insisted that the crossing barriers were open at the time of the collision, according to her employer.

“We saw each other last night in her hospital bed and she was perfectly lucid,” said a bus company official. “She told us she crossed (the train line) confidently and calmly, with the barriers open and crossing lights not flashing.”

Both the bus driver and the train driver were given toxicology tests that came back clean.

As a debate broke out about whether enough has been done to secure some 15,000 similar level crossings in France, national rail operator SNCF issued a statement declaring itself “shocked by the serious accusations” made against it “without any evidence”.

It said that the barriers had been “functioning normally”.

A schoolboy travelling on a bus behind the one hit told France 3 television that “the barriers were not closed and there were no flashing lights.”

The accident is the worst involving a school bus in France since 1987, when 53 people including 44 children were killed in a pile-up involving two coaches that were taking students to a summer camp.