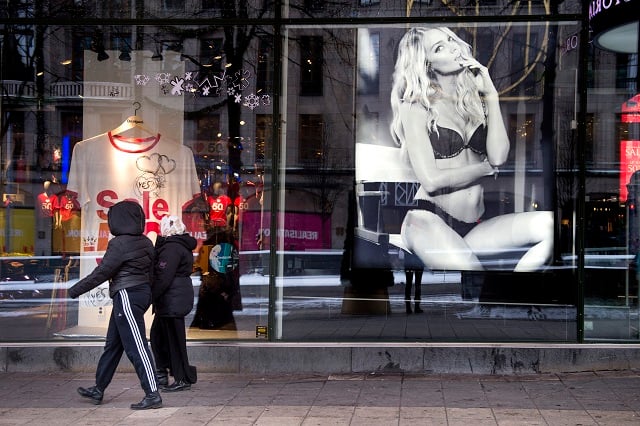 The city's Traffic Committee voted on Thursday to introduce ethical guidelines on outdoor advertisements in Stockholm, including digital displays and information boards.

Stockholm deputy mayor and head of Stockholm's traffic division Daniel Helldén told The Local he believed that the measure would be passed by the next city council meeting and come into effect within two to three months.

“The city has a responsibility towards its citizens, to ensure that advertising they are exposed to is not offensive or upsetting in any way,” Helldén told The Local. “We need to make sure that sexist and racist advertising doesn't appear.”

Under the new guidelines which Stockholm politicians are working on together with advertising companies, he said, “if the Traffic Committee judges that an advertisement is racist or sexist, we can ask them to take it down within 24 hours. But it won't be us as politicians who make that judgment.”

These judgments would be based on existing guidelines from the Advertising Ombudsman, which state that advertisments should not depict women or men as “mere sex objects”, in a “stereotypical gender role” which is degrading, or in other ways which are “degrading and clearly sexist”. An additional guideline would ban racist depictions from the advertisements.

“It's important that Stockholm residents can feel safe,” Helldén said.

Asked if the decision was particularly important in light of the huge #MeToo campaign in Sweden, he explained: “We have been working on this for a long time, but the importance of not having sexist or racist advertisements has been highlighted by the #MeToo campaign”, adding that advertisements acted as a “mirror” for society and the kinds of harassment and sexist behaviour which have been brought to light by the campaign.

The decision from the Traffic Committee also calls for ongoing communication between advertisers and Stockholm politicians to counter offensive advertisements.

Anders Ericson, CEO of Sveriges Annonsörer which represents advertising agencies in Sweden, has previously argued that such a ban would restrict freedom of expression.

Ericson told Dagens Nyheter earlier this year that it was “dangerous” to introduce such restrictions, and said that Sweden was “probably the country with the least sexist advertising in the world”.

However, a study from the Swedish Women's Lobby and organizations in Denmark and Norway last year labelled Sweden as the “worst Nordic country” at tackling the issue, and criticized Sweden's lack of legislation against sexual discrimination in advertising.

Earlier this year, Paris banned sexist adverts from the French capital's billboards, as well as those deemed to be homophobic, or degrading to the relationships between men and women. And in Germany, Berlin has also mulled a similar move.

PARTNER CONTENT
Summer in Stockholm: Find your very own ‘smultronställe’

PARTNER CONTENT
Winter escapes: treat yourself with a trip to the ‘Venice of the north’
Url copied to clipboard!