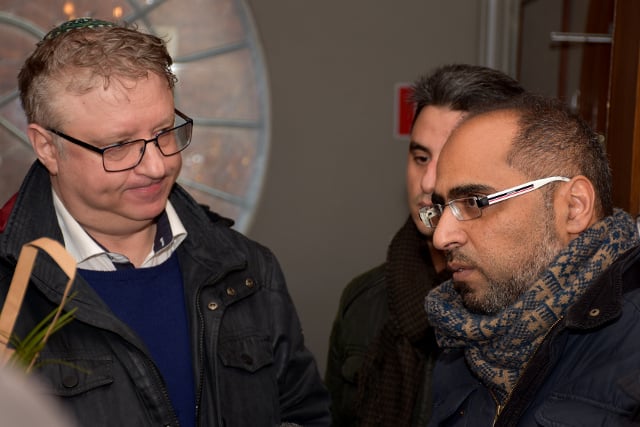 Ala Eddin Al-Qut, activities head at Islamic educational organization Ibn Rushd on a visit to a synagogue in Malmö. Photo: Mohamad Khalifeh

On Friday, protesters chanted anti-Semitic slogans at an unauthorized demonstration in Malmö, while on Saturday an Israeli flag was burned at a demonstration in Stockholm, and on the same day three people were arrested after Molotov cockatails were thrown at a Gothenburg synagogue.

The incidents continued on Monday, when two bottles containing flammable liquid were thrown at a centre owned by the Jewish Community of Malmö (Judiska Församlingen i Malmö).

The organization's Vice Chairperson Freddy Gellberg told The Local that it has been an uncomfortable few days.

“With some of the threatening things said at the demonstration and the video of it being shared around, it obviously hasn't been particularly comfortable for anyone. Then the Gothenburg incident happened. And it can't be acceptable to express yourself in that way.”

“It's an intense period and we want the help of the police to guard certain places,” he added. Security has been boosted around places of worship in Stockholm, Gothenburg and Malmö.

A number of Muslims visited the Jewish Community on Sunday to express their sympathy and leave flowers, he said, adding that in general the support has been good:

“The support has been big I think, we've no cause to complain about that. The police, government and municipal leaders have tried to help us in every way possible.” Flowers were brought to the synagogue in a show of support. Photo: Mohamad Khalifeh

Sweden's Foreign Minister Margot Wallström, who is due to meet Israeli PM Benajmin Netanyahu in Brussels on Monday, said that more needs to be done to fight anti-Semitism in Sweden but argued that it is already being taken seriously. Swedish PM Stefan Löfven said that “there is no place for anti-Semitism” in Swedish society and that perpetrators must be held accountable.

The events of recent days are not the first anti-Semitic incidents in Sweden during 2017. In September, neo-Nazi group the Nordic Resistance Movement (NRM) held a march in central Gothenburg on the same day as the holy Jewish holiday Yom Kippur, and had originally planned to march near one of the city’s synagogues, before a court forced them to change their route.

And recent events have created concern among Jewish people in Sweden, Gellberg noted.

“It does have an effect. With the NRM demonstration you perhaps didn't feel an individual threat, but this weekend has made it worst. So of course people who have perhaps never felt a sense of being the subject of hatred or being threatened start to feel like that’s the situation.”

“I'm 67 and during all of my upbringing – in the first 50 years, we know of course that anti-Semitism existed and the shadow of the Second World War was in your mind – but I had never experienced anything, or any kind of problem in my life as a Jew in Sweden, in my work and so on. Any kind of hatred being expressed towards me,” he explained.

“But there's a sort of 'classic' anti-Semitism, and then there's anti-Semitism linked to the Israel-Palestine conflict, and it's the latter that’s really emerging now, especially after Trump's decision (to recognize Jerusalem as the capital of Israel).”

On Sunday, members of Islamic educational association Ibn Rushd visited a synagogue in Malmö to express their sympathy and support with the Jewish community there and elsewhere in Sweden.

“We wanted to express all of our sympathy and solidarity with the Jewish Community, which represents Jews in Malmö and in Sweden. We feel it is a duty on our side to show our support with those people who may feel unsafe in society today. We already had a good relationship with the organization and took the initiative to show our sympathy as I said, and show that it's completely unacceptable to make people feel unsafe,” Ala Eddin Al-Qut, activity leader at Ibn Rushd explained to The Local.

“The demonstrators have to be held responsible for the threats and hatred they expressed. There will always be some people who don't care about society, and people who do. Those good, smart people need to pull together and show solidarity for one another, and send a strong signal to the others, that we'll combat racism in all of its forms. All types of it are unacceptable: we won't stand for that. There may be some individuals who take part in it, but we say all forms of anti-Semitic expression are unacceptable,” he continued.

Al-Qut said that although there are already organizations doing important work in building relationships between Muslims and Jews in Sweden, there is a need for continued, broader interaction between those of different faiths.

“Meetings are important. Those organizations who are working to help people meet and learn are the first step. And there are new people coming to Sweden all the time, so the organizations helping this process need to keep spreading and spreading. The issue should be given a platform and there should be constant reminders of it in different contexts.”

“It's not easy for us sometimes, the Islamic organizations who have these meetings with Jewish organizations, as we also get criticism from some Muslims who interpret it in a negative way. But we don't care: we stand where we stand, and we’ll keep pushing it, without compromise, that there's zero tolerance for racism of any kind,” he insisted.

Malmö Jewish Community leader Gellberg agreed that further dialogue between Jews and Muslims in Sweden is needed to improve the situation and stop anti-Semitic incidents like those that occurred at the weekend.

“What we've been doing in recent years is running a project with an Imam in Malmö, based on having meetings between Jews and Muslims, informing Muslims about what we do, and looking at both the differences between us and also the many shared things,” he explained.

“That's a good way to create a relationship between us because we're very isolated from one another. There are thousands of Muslims living in Malmö for example and that means you could live within your own group and perhaps don't need to absorb into society, which we Jews have done historically. There's no other key than to communicate with each other,” Gellberg concluded.