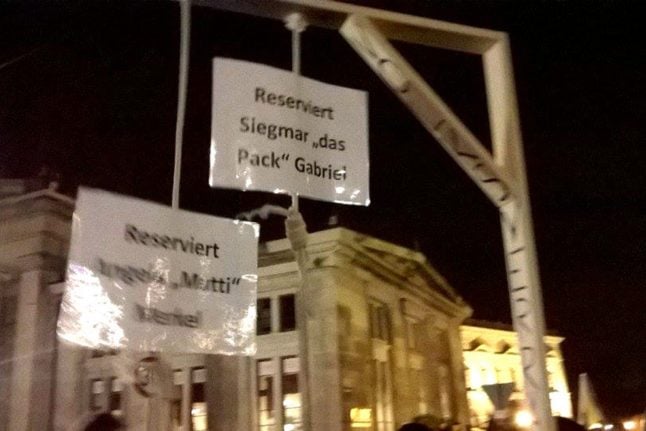 In a surprising decision by the Chemnitz judiciary, a citizen has been allowed to sell his miniature versions of the gallows used at the Dresden Pegida demonstration on October 12th 2015, reported the Süddeutsche Zeitung on Wednesday.

The miniatures are based on the life-sized gallows carried in the protest in 2015, which had signs hanging from the hangman's nooses with the words, “Reserved for Angela 'Mutti' Merkel” and “Reserved for Sigmar 'low-life' Gabriel”.

Each miniature gallow was decorated just like the original, including the reservations for the Chancellor and deputy Chancellor. For just €15, tourists could buy the mini gallows, which quickly attracted legal attention.

But the public prosecutors' office in Chemnitz explained their decision by saying that the gallows are art and shouldn't be taken seriously. They say that it was not demonstrable that the accused “seriously” wanted to incite an attack on Merkel or Gabriel.

Legal investigations also followed the appearance of the original gallows back in 2015 on suspicion of incitement and disturbance of the peace.

But the investigations in 2015 were shut down as, like with this year's case, neither charge could be proven.

According to the press report on the case, “it could not be proven that the accused wanted to encourage third parties to kill Chancellor Merkel and Minister Gabriel through his actions.”

In defence of their decision, the prosecutors' office suggested that, despite the graphic imagery, the gallows were indicative of a desire for the “political death” of Merkel and Gabriel, and had nothing to do with actual violence.