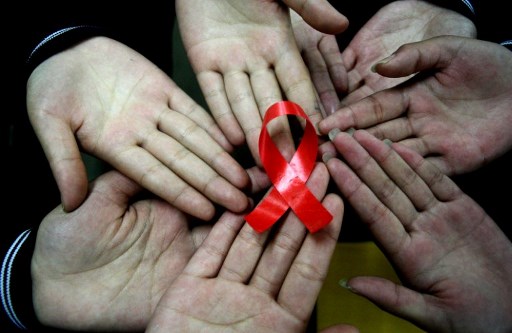 The red ribbon is the symbol of support and awareness of people living with HIV. Photo: STR/AFP
This year so far 118 people have reported cases of discrimination and prejudice, the highest number since figures were first recorded in 2006, said Swiss AIDS support group AHS ahead of World AIDS Day on December 1st.
Workplace harassment and redundancy, discrimination by insurance companies and landlords and data protection violations are among the instances of prejudice reported by HIV positive people to the organization.
In one case, the vengeful ex-partner of an HIV positive person told the latter’s employer about their HIV status and succeeded in getting them fired.
In another, police revealed the HIV status of a person they were putting into emergency accommodation and that information was illegally relayed to other inhabitants, causing panic and forcing police to accommodation the person elsewhere.
The AHS also reported instances of health insurance companies refusing to pay for vital emergency treatment for people with AIDS, and one case of severe harassment of an HIV-positive person in the workplace which caused them to leave their job.
Two foreigners were denied a permit to live in Switzerland after Swiss health insurers refused to cover them because they were HIV positive, added the organization.
Some 20,000 people in Switzerland are HIV positive, said the AHS.
Last year 542 new cases of HIV were reported, a one percent rise on the previous year after many years in which the number of new cases declined.
However that’s relatively stable compared to rates of other sexually-transmitted diseases which have risen sharply.
In 2006 there were 200 new cases of syphilis, compared with 800 ten years later; for gonorrhoea the figures were 800 and 2,400 respectively.
Url copied to clipboard!