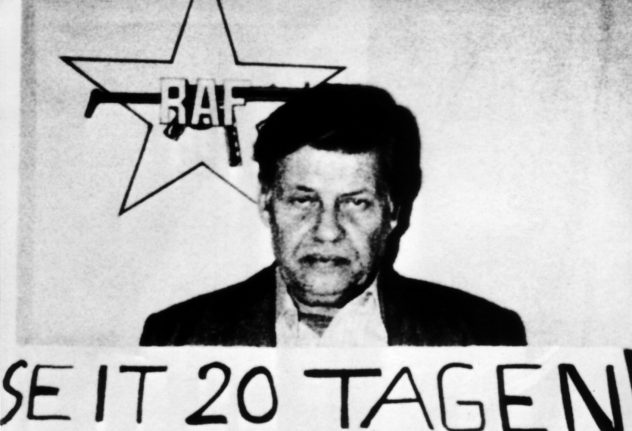 “It sounds so banal, but first of all I want to ask for forgiveness,” Silke Maier-Witt, 67, told Jörg Schleyer, one of the three sons of the group's victim Hanns Martin Schleyer, in a meeting organised by Bild daily.

Maier-Witt, who now lives as a retiree in Skopje, Macedonia, previously served 10 years in prison for her role in the 1977 kidnapping and murder of Schleyer, then head of the German employers' federation.

The Schleyer case was one of the most infamous in the 1977 “German autumn” when the state was at war with the “urban guerillas” of the group, also known as the Baader-Meinhof gang after two of its founders.

The group had emerged in 1970 out of the radical fringe of the Vietnam war protest movement and took up arms, pledging solidarity with revolutionaries such as Che Guevara and Ho Chi Minh.

Their declared targets were what they saw as US imperialism and a “fascist” German state that was still riddled with former Nazis.

After training with leftist Palestinian militants, the founding members launched a spate of shootings, bombings and kidnappings targeting politicians, police, bankers, business leaders and US troops. By 1977, Andreas Baader and other founding members were long since behind bars, while their comrades sought to free them, including through the abduction of Schleyer.

After allied Palestinian militants had hijacked a Lufthansa plane but were killed by German special forces, the kidnappers murdered Schleyer and dumped his body in the trunk of a car in Mulhouse, France.

It was Maier-Witt who announced the killing to German media in a phone call.

Maier-Witt in the Skopje meeting said she had long avoided any contact with the victims' relatives “out of a certain cowardice”.

The former militant, who after her time in prison worked for a charity in the Balkans, said she had never personally met Schleyer, but had been tasked by the RAF gang with transcribing protocols of his “interrogations”.

“I remember your father saying that, regarding capitalism and imperialism, things weren't as simple as we thought,” she said according to the Bild report.

By the time of Schleyer's murder, the RAF had claimed over 30 victims, but many more killings followed.

The group only disbanded in 1998, and, although it had ironically helped to vastly expand German police powers, many murders were never solved.

Today, most former militants are dead or living quietly as ex-convicts.

Three remain on the run, suspected of robbing money transport vans with grenade launchers to finance their retirement.