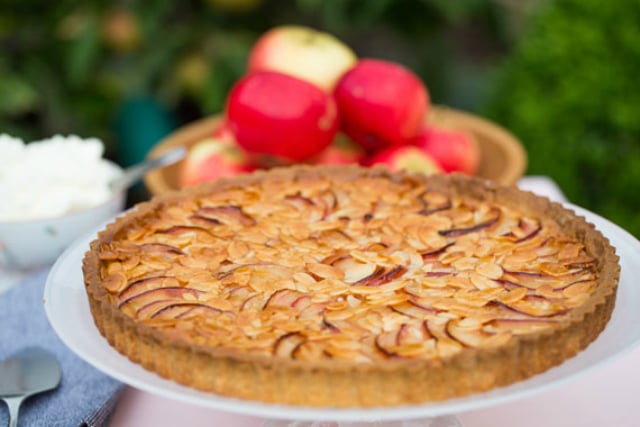 The Swedish name of this tart (Äppeltårta med mandelfyllning och tosca) translates as ‘apple tart with almond filling and tosca’. Tosca refers to the fact that the topping is based on the topping from Toscakaka, a Swedish cake created in honour of Puccini’s opera.

Based on a recipe by Maud Onnermark.

Preparation time: 25 minutes (plus time for the pastry to chill)

. The tart looks more attractive when made with red-skinned apples. Swedes like to use Ingrid Marie, a variety popular in Scandinavia, but other varieties that work well include Aroma, Frida, and Discovery.

. Liquid glucose (sometimes called glucose syrup) is widely available, although if you can’t find it you could substitute with corn syrup, but NOT glycerine, which is entirely different.

1. Make the pastry by putting the flour and sugar in a food processor and giving it a few whizzes. Add the butter and whizz for 10-15 seconds until the mixture resembles fine bread crumbs.

2. Add the egg yolk and process for a further 20-30 seconds until the pastry clings together. (If it doesn't, add a teaspoon or two of cold water.)

5. Prick the base of the tart and bake for 12 minutes.

6. Whilst the case is baking, mix the butter for the filling with the ground almonds, caster sugar, a large egg and the zest from the lemon.

7. Put the lemon juice in a large bowl.

8. Core and slice the apples very thinly and toss the slices in the lemon juice to prevent them from going brown.

9. When the case is baked, spread the almond filling over the base and then top with the apple slices.

10. Bake in the middle of the oven for about 25 minutes, until the filling is set.

11. Meanwhile, melt the butter for the topping and then stir in the flour, sugar, liquid glucose and flaked (slivered) almonds. Keep stirring the mixture on a low heat until it starts to simmer.

12. Spread the mixture over the filling and continue baking the tart for a further 10 minutes, until the topping is a light brown toffee colour.

The most famous of all Swedish cakes outside Sweden, the classic kanelbulle (cinnamon bun) is the symbol of Sweden abroad, no doubt helped by the fact that Swedish furniture giants IKEA stock frozen buns in their food stores for customers to bake off at home.

Forget American tear-apart cinnamon rolls baked in a pan and slathered with cream cheese frosting: a classic Swedish cinnamon bun is baked individually using a yeasted dough spread with cinnamon sugar and butter. The dough is then rolled up, sliced into strips which are then stretched out and knotted into buns, baked, glazed with sugar syrup and sprinkled with pearl sugar.

Home-made varieties skip the stretching and knotting step, rolling the cinnamon-sprinkled dough into a spiral instead which, although less traditional, tastes just as good.

Kanelbullar in Sweden often include a small amount of Sweden’s favourite spice: cardamom. If you’re a fan of cardamom, try ordering the kanelbulle‘s even more Swedish cousin, the kardemummabulle or cardamom bun, which skips the cinnamon entirely and goes all-out on cardamom instead. 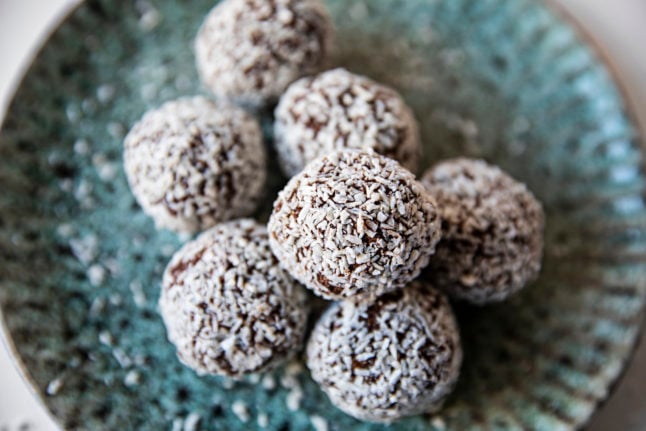 A great option if you want a smaller cake for your fika, the chokladboll or ‘chocolate ball’ is a perfect accompaniment to coffee – some recipes even call for mixing cold coffee into the batter.

They aren’t baked and are relatively easy to make, meaning they are a popular choice for parents (or grandparents) wanting to involve children in the cake-making process.

Chokladbollar are a simple mix of sugar, oats, melted butter and cocoa powder, with the optional addition of vanilla or coffee, or occasionally rum extract. They are rolled into balls which are then rolled in desiccated coconut (or occasionally pearl sugar), and placed in the fridge to become more solid.

Some bakeries or cafés also offer dadelbollar or rawbollar/råbollar (date or raw balls), a vegan alternative made from dried dates and nuts blended together with cocoa powder. 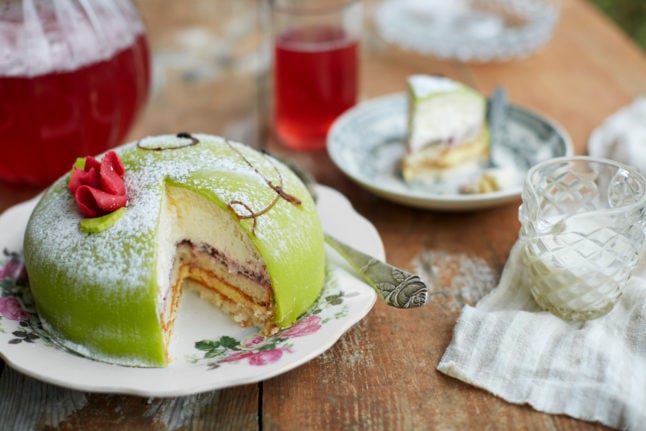 The lime-green prinsesstårta or ‘princess cake’ may look like a modern invention with it’s brightly-coloured marzipan covering, but it has been around since the beginning of the 1900s, and is named after three Swedish princesses, Margareta, Märta and Astrid, who were supposedly especially fond of the cake.

The cake consists of a sponge bottom spread with jam, crème pâtissière and a dome of whipped cream, covered in green marzipan and some sort of decoration, often a marzipan rose.

Prinsesstårtor can also be served in individual portions, small slices of a log which are then referred to as a prinsessbakelse.

Although the cakes are popular all year round, in the Swedish region of Småland, prinsesstårta is eaten on the first Thursday in March, due to this being the unofficial national day of the Småland region (as the phrase första torsdagen i mars is pronounced fössta tossdan i mass in the Småland dialect).

Since 2004, the Association of Swedish Bakers and Confectioners has designated the last week of September as prinsesstårtans vecka (Princess cake day). 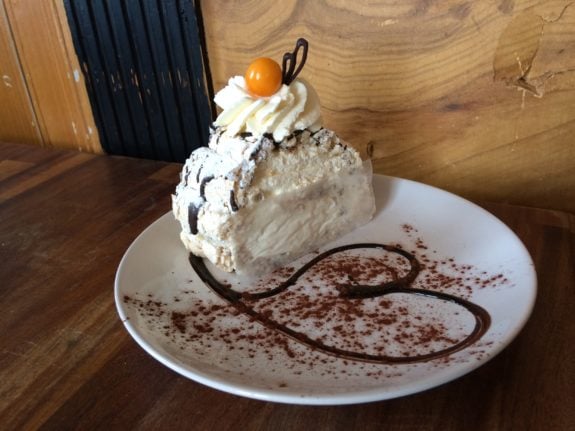 Belonging to the more traditional cakes, a Budapestbakelse or “Budapest slice” is a type of rulltårta or “roll cake” similar to a Swiss roll, consisting of a light and crispy cake made from whipped egg whites, sugar and hazelnut, filled with whipped cream and fruit, often chopped conserved peaches, nectarines or mandarines, and rolled into a log.

The log is then sliced into individual portions and drizzled with chocolate, then often topped with whipped cream and a slice of fruit.

Despite its name, the Budapest slice has nothing to do with the city of Budapest – it was supposedly invented by baker Ingvar Strid in 1926 and received the name due to Strid’s love for the Hungarian capital.

Of course, the Budapestbakelse also has its own day – May 1st. 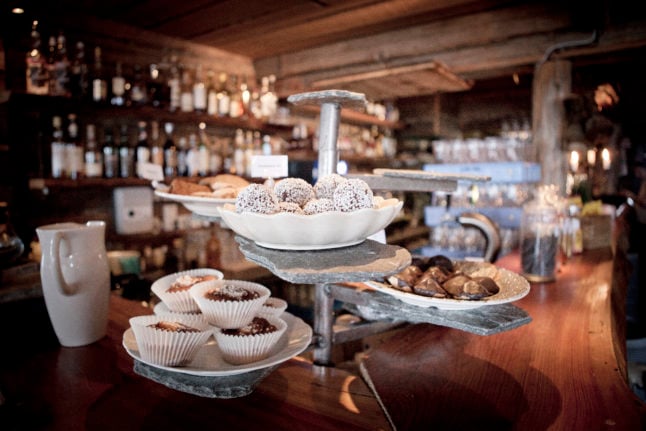 Another smaller cake, a biskvi (pronounced like the French biscuit), consists of an almond biscuit base, covered in buttercream (usually chocolate flavoured), and dark chocolate.

Different variants of biskvier exist, such as a Sarah Bernhardt, named after the French actress of the same name, which has chocolate truffle instead of buttercream.

You might also spot biskvier with white chocolate, often with a hallon (raspberry) or citron (lemon) filling, or even saffransbiskvier around Christmastime.