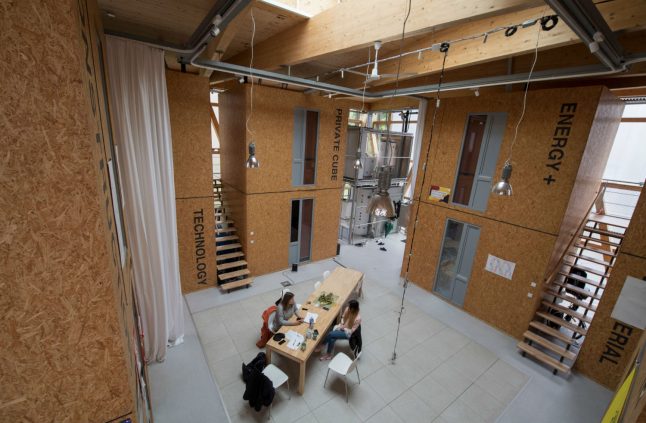 Darmstadt Technical University's project, Cubity, is student accommodation with a difference. It only costs €250 a month to rent and produces more energy than it uses, making it very eco-friendly.

But this saving comes with one significant downside: the rooms are only 7.2 square metres in size, almost two square metres smaller than the legal minimum for a child's bedroom in Germany.

Built in Frankfurt's Niederrad district in the south-west, the Cubity building is a 16m-by-16m cube with an outer wall of glass, inside of which are individual cubes for each of the 12 inhabitants. Each personal cube is 7.2 square metres and has a bed, a desk and an ensuite bathroom.

In the cramped rooms, everything possible is done to save space. Drawers and wardrobes are hidden in the beds and the desk slides back into the wall.

The university is trying to prove with this project, which is sponsored by prefab house company Holding AG, that one can build homes in a space saving and innovative way.

The bedroom cubes are stacked to create two storeys and are grouped around a communal eating area called the “Marketplace”. There is also a roomy kitchen and another communal area for reading and watching TV.

Living and sleeping in the cube, however, takes some getting used to, “in seven square metres you quickly reach your limits” law student Kai Julian Kemmler explains. One of the main appeals of the project is that the building is the first student home worldwide to conform to the “plus-energy standard”.

This means that the building produces more energy than it consumes, feeding energy back into the national grid. Cubity does this with photovoltaic panels on the roof which produce electricity for the whole house.

Architecture students from the university designed the house and were rather inventive with its systems. The house is heated and cooled using pipes which go through the floor and ceiling. Depending on the time of year, either hot or cold water is pumped through the pipes to either heat or cool down the building.

The innovative new systems don't always work as they are supposed to, however, as the cubes get very hot in summer and the cooling system can take some time to get going. Elisa Stamm, who supervises the project's scientific side for the university, admits the flaws but says “it can't be perfect from the beginning”.

Community is the main focus of the project. The lack of private space forces housemates to cook, eat and relax together and that can exacerbate common student problems.

As in every student house, some housemates are cleaner than others, which can cause arguments. Additionally, the cubes aren't very sound-proof, so the inhabitants introduced a rule against cooking or putting the washing machine on after 11 pm.

Another issue that has arisen since the project's beginning is that none of the initial inhabitants could choose who they were living with as student services offered places on a first-come-first-served basis. But in the future, housemates will be able to interview and choose their own applicants.

Despite the project's flaws, none of the original housemates have thus far chosen to leave, even Kemmler, who criticises Cubity, has no intention of leaving as the “€250 rents are unbeatable”.

What's more, finding student housing can be a long process – last year, when Kemmler was looking for a “normal” home in Frankfurt with student services, he was 800th in line.

Bafög is an abbreviation for a word that would surely be the longest in pretty much any other language expect German: Bundesausbildungsförderungsgesetz. This tongue twister breaks down to mean Federal Training Assistance Act.

Ever since the 1970s it has helped Germans from poor backgrounds to take up a place at university to at a training colleague, with the idea being that financial hardship should never prevent someone from entering higher education.

Some 460,000 students were being assisted with Bafög payments in 2020, the last year for which there are numbers.

READ ALSO: How to finance your master’s studies in Germany as an international student

Who is entitled to BAföG?

There are two basic conditions attached to BAföG: you have to be under the age of 30 to apply and you parents have to be low-wage earners.

There are some exemptions for the age restriction. If you can show that you were not able to start a course of study before your 30th birthday due to health or familial reasons then you might still be eligible later. Also, if you are applying for support for a Masters degree then you can apply for Bafög up until the age of 35.

According to German law, your parents have an obligation to financially support your education. This means that German authorities ask for evidence of their income to assess whether you are in need of state support.

And this applies whether your parents work in Germany or abroad, the Education Ministry confirmed to The Local.

“Income calculation under the BAföG rules takes place regardless of whether one’s parents live in Germany or abroad. This applies both to German nationals and to people with non-German nationality who are eligible for support under BAföG,” a spokesperson for the ministry confirmed.

Bafög is by no means only available to Germans. A whole variety of foreign nationals can also apply.

The rules on which foreign nationals are entitled to financial support are fairly complicated. But the following list on eligibility is somewhat exhaustive:

READ ALSO: Essential German words to know as a student in Germany

How do repayments work?

The Federal Education Ministry states that you are expected to pay back your loan even if you return to your home country after completing your studies.

Repayment begins five years after you received the last installment of the loan at which point you are expected to pay back €130 a month. Although this amount can be reduced if your salary is low.

If you haven’t paid everything back after 20 years then the rest of the debt is dropped.