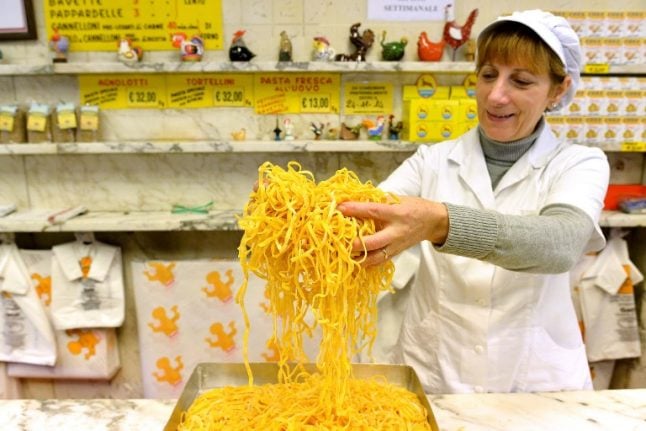 Why do Italians love pasta? There are too many reasons to count.

So instead, we’ll share with you a few things you might not know about Italy’s best-loved export.

Italians used to eat pasta with a spike

Forget the fork and spoon debate: in the Middle Ages, Italians would have been shocked to see diners using anything except a wooden spike to twirl up their noodles.

The instrument was known as a punteruolo and was gradually replaced by the fork as Italians realised that three spikes were better than one.

The fork’s practicality for eating pasta is believed to be a factor in why Italy adopted the cutlery earlier and more enthusiastically than most other countries in Europe.

Naples is the perfect place to make pasta

Campania, the region of southern Italy around Naples, has arguably the world’s best climate for making pasta.

Its rich soil and warm weather helps durum wheat to grow year round, while the combination of cool, dry breezes from the sea and hot, wet winds from Mount Vesuvius provide the perfect conditions to dry pasta slowly – but not too slowly – in the open air. Artisanal pasta-making may have flourished in southern Italy, but the first pasta factory was in the north. In 1740 Venice authorized Paolo Adami of Genova to open a pasta factory there.

The licence stipulated that he would teach Venetian apprentices the secrets of fine pasta because, other than Neapolitans, the Genovese were considered Italy’s pasta kings.

We eat 13 million tonnes of pasta a year

The world spent $23 billion on pasta in 2016, according to market research by Euromonitor. That bought us some 13 million tonnes of the stuff.

Italy is the world’s biggest market, followed by the United States. But guess who buys the most pasta after them?

Russia. So popular is pasta becoming there that Euromonitor predicts Russia’s appetite could eventually overtake Americans’. There’s a science to the shapes

The multitude of shapes that pasta comes in, around 600 at the latest count, aren’t just to look pretty.

There are some pretty strict rules about which shape best suits to which dish.

Each shape has something it’s especially good at: long, thin pasta sweeps up thinner sauces; thick noodles balance out rich, meaty ones; short, hollow pastas are perfect for when you want to pick up a mouthful of pasta, a scoop of sauce and chunks of meat or veg at the same time; while the smallest ones add just the right bite to a bowl of soup.

So don’t even think about pairing spaghetti with a chunky vegetable sauce, for instance. And why would you ever – ever – use tiny ditalini in anything except a soup?

Giacomo Casanova was an eater as well as a lover. In his 19th-century autobiography, he tells the story of travelling to Chiogga, near his native Venice, and encountering a “macaronic academy”: a club for poets who would compete to compose verses in praise of… macaroni.

In his account, Casanova reels off ten stanzas and is immediately made a member. He then impresses the poets further by eating so much pasta at a club picnic that they name him the “prince” of macaroni.

There was once a 25-metre lasagna

A supermarket in the town of Wieliczka made the record-breaking lasagna in June 2012 in honour of the Italian national football team, who stayed there throughout the Euro 2012 championship.

You can eat it sweet

… and we’re not even talking about novelty chocolate pasta. There are many established pasta desserts that won’t get you sniffed at by an Italian. How about fried angel hair topped with honey and pistachios? Or almond ravioli stuffed with ricotta and orange zest?

And if you do get any complaints from pasta purists, you can politely inform them that in Renaissance Italy, pasta was commonly served with sugar, cinnamon and soft cheese.

Pasta was once blamed for all of Italy’s woes

One of the strangest episodes in pasta history occurred in the early 1930s, when a collective of Italian thinkers and artists declared war on Italy’s favourite food. No spaghetti for Marinetti. Photo: Manifesto of Futurism via Wikimedia Commons.

According to author Marco Ramperti, a fellow member of the Futurist movement, “spaghetti poisons us” and “our thoughts wind round each other, get mixed up and tangled like the vermicelli we have taken in”.

Pasta keeps you thin, saves you from heart attacks and makes you happy

Various health benefits have been attributed to pasta over the years, more or less convincingly.

Italian researchers found convincing evidence that people who eat a lot of pasta are less likely to be overweight, which they attribute to its part in the famous Mediterranean diet of fresh vegetables and olive oil. Another study showed that eating barley pasta could help to make the heart more resilient to heart attacks.

And many nutritionists claim that eating carbohydrates such as pasta increases levels of serotonin, the body’s happiness chemical.

In any case, what’s indisputable is that pasta-guzzling Italians live longer than almost anyone else. That’s good enough for us. 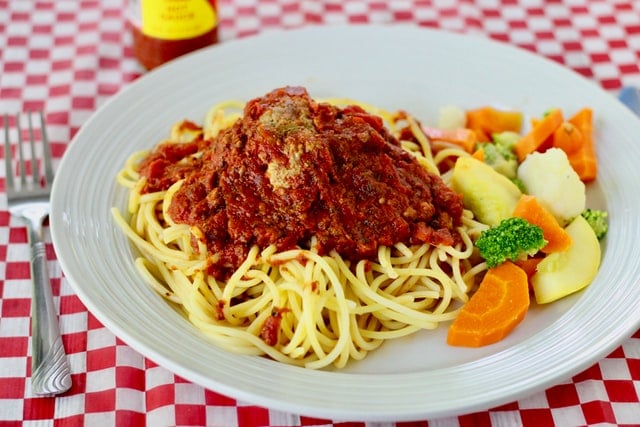 The Italian food police are on their way. Photo: logan jeffrey on Unsplash

It turns out that putting cream in carbonara is not actually the worst thing you could do when holding a dinner party for Italian friends.

And, while not ideal, neither is snapping your spaghetti before cooking it, or even serving it as a side dish.

The many unwritten rules around eating and drinking in Italy are often baffling to foreigners, while Italians themselves are famous for raging against what they see as “disgusting” interpretations of classic dishes.

But in Italy, some of these food-related faux pas are viewed as far more upsetting than others, according to the results of a international study published by YouGov.

At the end of last year, researchers compiled a list of 19 ways in which foreigners are often accused of abusing Italian cuisine and asked people in 17 countries, including Italy, whether each was acceptable or unacceptable.

Of these, eight culinary practices were judged as being either fairly acceptable or divisive by Italian survey respondents.

Eating pizza at lunchtime instead of in the evening was deemed wrong by only a minority of Italians; while many also reserved judgement on people combining Bolognese sauce or ragù with spaghetti – which is famously not the done thing in Bologna.

Putting sauce on top of pasta, as opposed to serving the pasta coated in the sauce, meanwhile, was seen as mildly controversial.

However, the majority deemed 11 of the listed transgressions to be completely out of order, issuing a clear warning against certain habits which are widespread outside the country – and which, for the most part, were not seen as problematic by the majority of respondents in other countries surveyed. Here’s the list of the very worst crimes against Italian food according to the study – ranked from the offences seen as deeply disturbing to those deemed slightly less terrible.

1. Putting ketchup on pasta – this was by far the most distressing item on the list according to Italians, scoring -82. It was one of only two food crimes on the list that Americans also deemed unacceptable (-48), with Spaniards similarly against (-46). However, in 11 countries people said this was perfectly fine, with Indonesians (+76) and Hong Kongers (+79) the most enthusiastic. People in Sweden also seem to enjoy pasta with ketchup, the survey found (+46).

2. Putting pasta in cold water and then boiling it – the results are clear with a score of -71: don’t do this in front of an Italian unless you want them to run screaming from the kitchen. Of course, you’re supposed to add the pasta to water that’s already gently boiling. Adding pasta to cold water was the most disdained practice around the world overall, including by Americans, with only Chinese (+16) and Hong Konger (+31) respondents more likely to be ok with it.

3. Putting pineapple on pizza – there’s a reason you won’t see a Hawaiian listed on the menu in many pizzerias in Italy – it’s seen as the third-worst thing you could do to the national cuisine with a score of -63 .France isn’t keen either (-15) though Australia appears to have plenty of fans of fruity pizza toppings (+50).

4. Serving pasta as a side dish – think a mound of spaghetti would be a nice accompaniment to your grilled meat or fish? Think again if you’re in Italy, where the idea of having pasta as a contorno ranked as one of the worst possible food crimes with a score of -63. As all Italians know, pasta is served before the meat, fish or other main course, as a primo. No other country surveyed had a problem with this, though, and the French were especially big fans of pasta as a plat d’accompagnement.

5. Cutting long pasta with a knife while eating – the message is clear: don’t snap it, don’t cut it; you’ll need to learn how to twirl your spaghetti elegantly around your fork if you want to be invited back to an Italian home for dinner. This habit is another one people in the country apparently find disturbing, with a score of -46.

6. Putting cream in carbonara sauce – perhaps surprisingly, this famous crime against Italian cuisine – which regularly provokes furious online outbursts and stern warnings from Italian chefs – came in at only 6th place with a score of -45. As any Italian will tell you, there’s no need for cream in the authentic recipe.

7. Topping seafood pasta with cheese – this rule may not seem obvious to non-Italians, but we don’t recommend asking for the grated parmesan after being served a steaming plate of spaghetti alle vongole. It’s a major faux pas in Italy, where it scored -39, while Americans gave a far more positive rating of +38.

8. Rinsing cooked pasta in cold water – while many people abroad may think they need to rinse boiled pasta, Italians wouldn’t do this. Instead, many recipes call for the starchy pasta water to be conserved and used to finish the sauce. While perhaps seen as more senseless than revolting, this practice scored -23 in Italy.

9. Drinking cappuccino after lunch – Long, milky coffees are for breakfast in Italy, and while the barista probably won’t refuse to make you a cappuccino at 3pm, be aware that this might cause confusion and could turn other customers’ stomachs, as Italians gave this habit a score of -23. That’s despite the rest of Europe being fine with the concept; it scored +65 in Spain, +62 in Germany and +53 in France.

10. Boiling pasta without salt – Italians will tell you that a pinch of salt is essential in the cooking water for pasta, and leaving it out is highly controversial, with a score -17. Meanwhile, the British don’t see a problem (+15).

11. Eating garlic bread with pasta – While the rest of the world may ask what could possibly be wrong with this, the concept of filling a baguette with garlic butter and baking it just doesn’t really exist in Italy – even if it does seem to exist in every Italian restaurant on the planet outside of the country itself. Americans are particularly enthusiastic about this combination (+83), as are Brits (+80) but Italians gave it the thumbs down with -14.

The results also showed that attitudes to some of the established food rules are shifting among young Italians.

The biggest difference comes with drinking cappuccino after a meal, something which 18-24 year-old Italians tend to think is fine (+24), but which older age groups – and especially the over 55s (-36) – say is unacceptable.

Young Italians are also substantially more likely than their older peers to say that eating garlic bread with pasta or having risotto as a side dish is ok.

However, younger Italians seem to have turned against the practice of adding oil to the water when cooking pasta. Those aged 18-24 and 25-34 tend to consider this unacceptable, whereas their elders tend to see it as fine, the survey found.