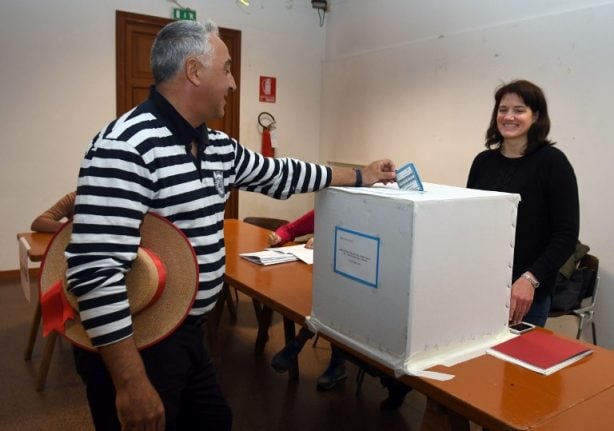 A gondoliere casts his ballot in Veneto's referendum on autonomy. Photo: Andrea Pattaro/AFP

Millions of people in Lombardy and Veneto turned out to answer “sì” to the question: “Do you want your region to have further forms of autonomy?”

The results are not binding, but have given the Northern League – the right-wing party that governs both regions – a strong mandate to ask Rome for more control over issues including taxes, security, immigration and education.

An overwhelming 98 percent of ballots in Veneto were “yes” votes. Turnout was 57 percent, safely over the 50 percent threshold that the region had set for the result to be valid.

In Lombardy, the yes campaign won 95 percent of votes for a lower turnout of around 39 percent. There was no minimum turnout required.

“We can now write a new page: the regions that ask for more power will get it,” the president of Lombardy, Roberto Maroni, told reporters.

Maroni said he planned to start the process of negotiating with Rome within two weeks.

Luca Zaia, his Veneto counterpart and fellow member of the Northern League, said his region would seek control over 23 policy areas and ask to keep nine-tenths of its tax revenues.

“What’s won is the idea that we should be in charge of our own back yard,” he commented.

“More than 5 million people voted for change today: we all want less waste, fewer taxes, less bureaucracy, fewer obligations to the state and the European Union, more efficient, more jobs and more security,” the head of the Northern League, Matteo Salvini, wrote in a triumphant post on Facebook.

“And tomorrow I will keep working because the people of other regions… from Puglia to Piedmont, Lazio to Tuscany, should also be able to choose efficiency and freedom. United we win.”

While the Northern League was founded on a single issue – northern devolution – in recent years it has aligned itself with far-right parties across Italy and Europe, calling for less centralised government, opposing immigration and criticizing the powers of the European Union.

Many saw the party's decision to call referendums in Veneto and Lombardy just months from a general election as a bid to rally its supporters. The move seems to have paid off, though other political parties pointed out after Sunday's results that they had not campaigned against the votes.

The outcome could end up helping the Northern League, along with their allies in the centre-right, in the 2018 election, said Italian economist Lorenzo Codogno. More broadly, it will “add to the sense of uneasiness in Europe,” he commented.

“Following the populist wave, now Europe has also to face a nationalists/regionalist wave, which somewhat overlaps with the populist one, and makes European integration even more difficult…

“The failure of Europe and nation-states to provide appropriate answers is a fertile ground for protest, anti-establishment movements, nationalism and regionalism.”