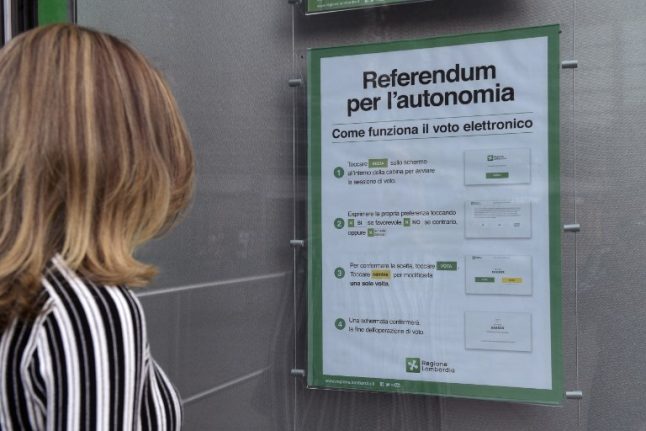 Here’s everything you need to know.

There’s also a micro-referendum in the province of Belluno, within Veneto, to decide whether residents want greater independence from the region itself.

What are they voting on?

Voters will answer a single question, in each case essentially: “Do you want your region to have further forms of autonomy?”

Neither Lombardy nor Veneto is asking voters to consider independence from the rest of Italy, only whether local authorities should have greater powers. Any region is allowed to pose that question under the Italian constitution.

The results are not binding.

When do they vote?

Polling stations are open from 7am to 11am on Sunday, October 22nd 2017, with results expected late that night. Why is it an issue?

Tax-payers in northern Italy have long complained that too much of their revenues go to the central Italian government, which then spends them in poorer regions in the south.

Lombardy and Veneto are two of Italy’s richest regions, producing around 20 and 10 percent of the country’s total GDP respectively. They each pay several times more money in taxes to Rome than they receive in investment and services.

The Northern League, the locally founded party that built its platform around greater autonomy for northern Italy, wants more control over taxation, as well as policies on security, immigration, education and environmental regulation.

So it’s not about a separate identity?

In its past, the League called for full secession from Italy and mooted the idea of a separate northern homeland called “Padania”, stretching from Piedmont all the way down to Umbria.

In recent years, however, the party has adjusted its demands. Now it advocates for greater regional authority within a united, federal Italy.

While some northern Italians identify themselves as different – Venetians, for example, have declared themselves a minority with their own language – only the most radical would call for actual separation from Italy. How are the votes expected to go?

Both regions are widely expected to say yes. The question has memorably been compared to asking voters if they love their mothers – for Italians, a no-brainer.

A poll by consulting firm Lorien in early October found that, across both regions combined, 69% of those who planned to vote would say yes, compared to 31% ‘no’s.

The real question, however, is turnout: the Lorien poll estimated maximum turnout at 42%, compared to 43% likely abstentions.

While Lombardy hasn’t set a minimum turnout requirement, at least 50% of Veneto’s voters need to take part for its referendum to be valid. If on the other hand it’s an emphatic yes, each region’s government will begin the complicated process of negotiating devolution with Rome. It could be a very long time before that brings any practical results.

Yet a ‘yes’ vote could set a precedent for other regions to seek more localized powers too. Emilia-Romagna has already begun to do so, while South Tyrol, Sicily and Sardinia among others have long harboured ambitions for greater self-governance.

More immediately, a landslide for the ‘yes’ campaign would be a boost for the Northern League ahead of Italy’s general election next year – which could prove significant given the right-wing, anti-immigration, anti-EU party’s growing presence in national politics.