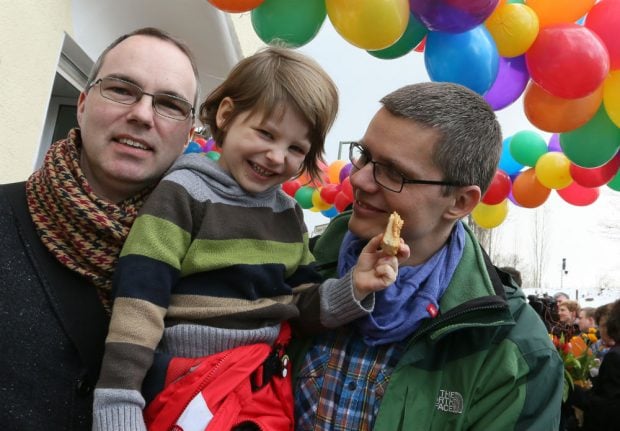 Kai and Michael Korok with their daughter Jana in Berlin in 2013. Photo: DPA.

Germany took big strides towards granting equal rights to gays and lesbians when it allowed same-sex couples to wed from October 1st.

Two days later, they submitted their wedding certificate to seek legal adoption of a two-year-old boy who has lived with them as a foster child since birth.

Confirmation of their adoption came through on October 5th, said the gay and lesbian rights organization LSVD in Berlin and Brandenburg state.

“It is also proof that 'marriage for all' is not just symbolic.”

Lawmakers this year voted to give Germany's roughly 94,000 same-sex couples the right to marry, following a shift in position by Chancellor Angela Merkel.

Through the extension of existing marriage law to same-sex couples, gays and lesbians automatically gained the same tax advantages and adoption rights as other families.

Merkel had surprisingly allowed conservative MPs to follow their conscience on a gay marriage vote – the trigger for the rush to pass a bill before the parliament's summer recess.

The German leader explained her thinking had changed after a “memorable experience” when she met a lesbian couple who had lovingly cared for eight foster children in her Baltic coast constituency.

Her shift in position – after 12 years of blockade by her Christian Democrats and their Bavarian allies – was seen by some as a tactical move to deprive her challengers of a popular campaign issue ahead of September's election.