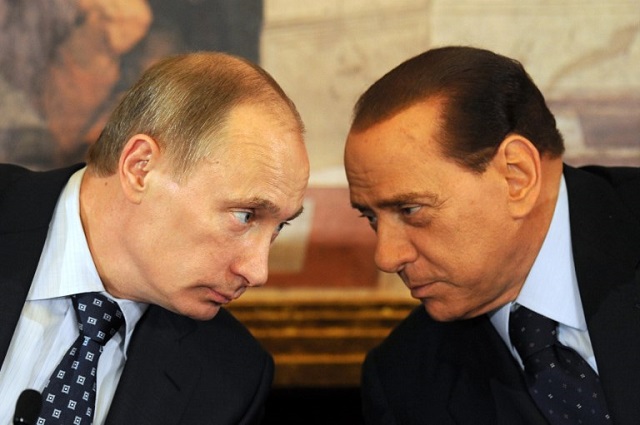 The cover featured a lifesize image of the two men shaking hands, with a backdrop of Russian and Italian landmarks.

It was one of a number of presents Berlusconi gave to Putin on Saturday, the Russian leader's 65th birthday, according to Italy's Corriere della Sera.

A picture of the duvet cover was shared on Instagram by Michele Cascavilla, a businessman whose company Lenzuolissimi sells luxury 'made in Italy' bedlinen, and whose book 'Le lenzuole di potere' (The bedsheets of power) included a preface written by Berlusconi.

Cascavilla shared the photo with hashtags including '#bestfriends' and '#love'.

Putin previously gave Berlusconi a bed in which a prostitute claimed she had had sex with the Italian businessman-turned-politician. The gift apparently went down well, with actor and activist George Clooney saying in 2011 that when he went to speak to Berlusconi about aid programmes in Sudan, the then-prime minister took Clooney to his bedroom to show him the bed.

The pair have stood by each other through respective scandals, with Putin defending his friend throughout the latter's 'bunga bunga' parties.

On Saturday, over 200 activists were detained in Russia for protesting in support of jailed opposition leader Alexei Navalny. Navalny hopes to run against Putin in the March 2018 general elections, in which Putin is widely expected to stand for a fourth term.