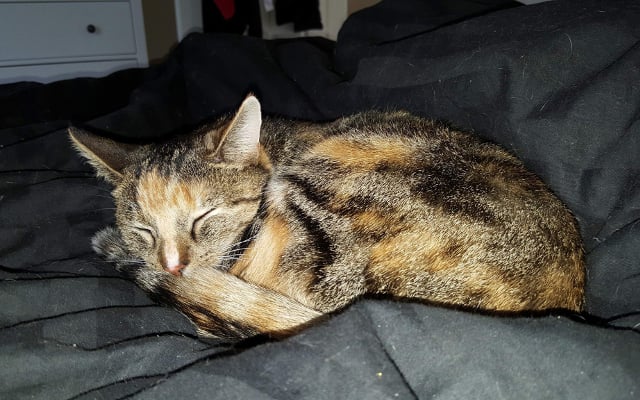 Cookie was brought over to the United Kingdom when her owner Jessica Vestin moved from Sweden to Derbyshire in 2015. But the cat sadly went missing from her home in August last year.

“I had had her since she was a ten-week-old kitten and she had just turned two when she sneaked out,” Vestin, who spent the next six months looking for the cat before eventually giving up hope of ever finding her again, told The Local.

Then one day a stray cat was handed in to an animal rescue centre, the RSPCA's Chesterfield and North Derbyshire branch, on September 18th.

The cat had a Swedish microchip, which meant the centre could not find her in its UK database, so it put out an appeal on Facebook asking people for help to find her owner.

“I didn't think it was true,” said Vestin about her reaction on first seeing the post. “She had been gone for a year and I was sure she had died. I cried of happiness when I saw the picture on Facebook!”

Cookie has now been reunited with Vestin and her other cat Chilli.

“It's almost as if she was never gone. She is the same cuddly and food-loving cat who loves her big brother Chilli just as much as the day she sneaked out,” said Vestin.

The animal rescue centre thanked its social media followers for their help.

“We put the cat on to Facebook and Twitter and asked our community of supporters to help. The post was shared far and wide and we even had an offer of help via Twitter from the Swedish embassy,” said Rachel Gray, manager of the RSPCA Chesterfield and North Derbyshire branch, in a statement.

“Thanks to the power of Facebook the owner was found.”

Send us an email with the details and we'll see what we can do, [email protected]