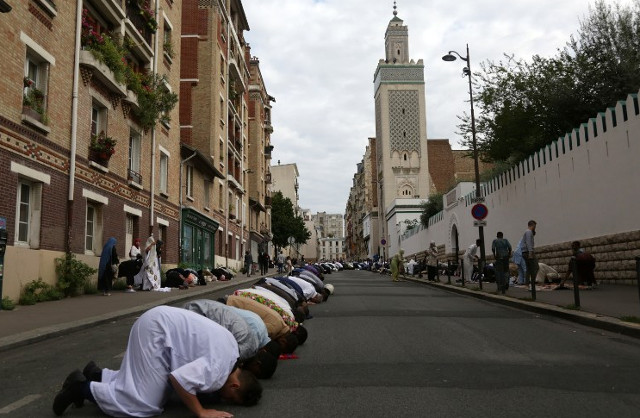 Photo: AFP
Muslims living in France feel a stronger attachment to their country than they do in much of Europe, despite experiencing high levels of discrimination.
That was one of the key findings of a new survey that looked at Muslims across Europe. The survey also found that  first generation Muslims feel more attached to France than their offspring.
This generational difference in feeling towards their country is greater in France than anywhere in Europe.
These are just some of the discoveries made by a recent survey by the Vienna-based EU Agency for Fundamental Rights (FRA) which surveyed 10,527 first and second-generation Muslims living in Europe.
The study took into account 15 EU member states: Austria, Belgium, Cyprus, Germany, Denmark, Greece, Spain, Finland, France, Italy, Malta, the Netherlands, Sweden, Slovenia and the United Kingdom.
Overall, the study found that a large majority of Muslims feel closely connected to the country they live in and trust public institutions despite facing “widespread discrimination”.
Nearly 40 percent of those surveyed across the 15 countries said that they had suffered discrimination and harassment because of their ethnic or immigration background
Here's how France measured up:

Muslims with French citizenship feel very attached to France, with Muslims rating their level of attachment at 4.3 on a scale of five.

That meant they were ranked fourth out of 15 EU member states. While generally across Europe it's first generation immigrants who feel less attached to their adopted country, in France the roles are reversed, with their children feeling less attached.
France also showed the biggest difference in opinion on attachment between first and second generation Muslims.
This trend is even more pronounced when it comes to trust in the police.

Muslims surveyed in France and Belgium also showed lower than average levels of trust in the police.

On a scale of 1-10, the average response from Muslims in France was 6. This compares poorly to Finland – where the highest levels of trust are exhibited, at 8.4.

Trust in police also higher in Britain and Germany, at 6.6 and 6.7 respectively.

It's important to note that the survey interviews were conducted during a time period that included major terrorist attacks in Belgium and France, which prompted an increase in police surveillance and identity checks.
Nevertheless, it was in the Netherlands, Italy and Belgium where the lowest levels of trust were seen.

When it came to Muslim respondents from North Africa alone, France scored high on countries where they feel most discriminated against.

A shocking thirty-one percent of respondents from North Africa said they had experienced discrimination in the past year, a figure which rose to 46 percent when taking into account the past five years.

France fell just behind the Netherlands  at 49 percent and Italy at 33 percent.
For Muslim respondents with Sub-Saharan African backgrounds in Denmark, France, Finland, Malta, Italy, and Sweden, their skin colour or physical appearance is the reason they face discrimination when they look for work or at the work place itself.
But for North Africans in France, the Netherlands and Belgium, and France, they believe it's their name that causes people to discriminate.

When looking into the level of awareness of anti-discrimination legislation, respondents from Turkey in Sweden (82 percent), from Sub-Saharan Africa in France (81 percent), the United Kingdom (80 percent) and Denmark (78 percent), and for North Africans in France (79 percent) and the Netherlands (78 percent) were the most aware.