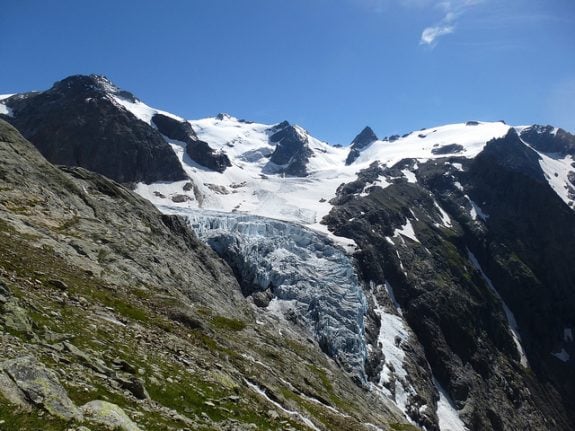 The Trift. Photo: Luigi Selmi/Flickr
Around 220 people were evacuated from their homes around Saas-Grund in the canton of Valais on Saturday after authorities predicted that the tongue of the Trift glacier was about to collapse, potentially sparking an ice avalanche that could engulf the village.
The glacier did indeed collapse on Sunday, with around 300,000 cubic metres crashing down into the valley, although the debris didn’t reach the houses. No one was injured.
According to the Tages Anzeiger the evacuation was able to be carried out in time thanks to Martin Funk, a glaciologist at technology institute ETH Zurich, who insisted that an expensive radar system was reinstalled to monitor the glacier just three days before it collapsed.
The story dates back to summer 2014 when rangers in the Saas-Grund area saw that the north face of the Weissmies had broken off. They sent photos to Funk, who saw them as evidence the glacier tongue would at some point collapse.
“I was quite frightened when I saw these photos,” he told the paper. “It looked as if the glacier would slip right into the valley.”
The authorities reacted quickly, installing a radar in the region to monitor the speed at which the glacier was shifting.
But at 400 francs a day, the radar didn’t come cheap – so after two years had passed and the glacier hadn’t showed signs of imminent collapse, those financing the apparatus decided to remove it and replace it with a high definition camera that took hourly photos instead.
Nothing further happened until August this year when Funk observed from the photos that the glacier had once again started to move rapidly.
In early September he asked the Zurich company that had developed the radar to reinstall it – however they didn’t have any available, the last one in Switzerland having been sent to Bondo in Graubünden to monitor the risk of further landslips after the huge rockfall that caused chaos in the valley at the end of August.
Finally, another radar was sent over from Germany and installed at the Trift on September 7th, allowing Funk to see that the collapse was likely to happen three days hence.
“Without the radar we wouldn’t have been able to predict the avalanche as precisely,” he told the Tages Anzeiger.
Although a third of the glacier tongue remains unstable it does not pose a threat to houses and residents have already returned home.
Bruno Ruppen, president of the commune, told Blick he was satisfied with the way the evacuation was carried out.
“The glacier has broken off without damaging anything. It could not have gone better,” he said.
He even added that the area – a popular ski resort in winter – may have benefitted from the media attention it had received.
“We have never seen so many journalists in the village,” he said.
Url copied to clipboard!